Boise State takes on Air Force on Friday night and this will be the only college football game on the schedule.

Boise State is hosting Air Force Friday night in a Mountain West showdown between a pair of Mountain division teams. For Air Force this is their second conference game, and their conference opener did not go well as they were throttled 52-20 against Utah State.

Boise State is looking for some real competition after getting embarrassed 38-6 by Washington in the season opener, and last week they got back on track against FCS level Tennessee-Martin. That game against an FCS team gave Boise State plenty of time to work out some kinks, but Air Force will provide a much stiffer challenge. 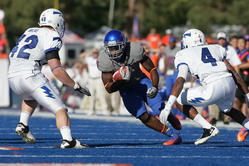 For Air Force they are looking to avoid going 0-2 in conference play, but they are a three-touchdown underdog and are playing with a backup quarterback in Jaleel Awini who is adequate but nothing special.

This is the only college football game on Friday night, so there is no excuse to not watch this game.