The Utah State Aggies are heading 90 minutes to Salt Lake City, Utah, to take on their in-state rival Utah Utes Thursday night at 8 p.m. ET on Fox Sports 1. With the game now just two days away we have the Utah State depth chart. There are very little surprises here as most of the spots were already predetermined with Chuckie Keeton at quarterback, Joe Hill at running back the entire offensive line and even the wide receiver spots were mostly known.

The only real unknown came at the secondary spot for Utah State. Head coach Matt Wells went with Tay Glover-White and Nevin Lawson to man down the cornerback spots and at the safety positions were awarded to Brian Suite and Maurice Alexander. All are upper classmen and while this position was hotly contested, the secondary has some depth to interchange the players.

Without further ado here is the Week 1 depth chart for Utah State. 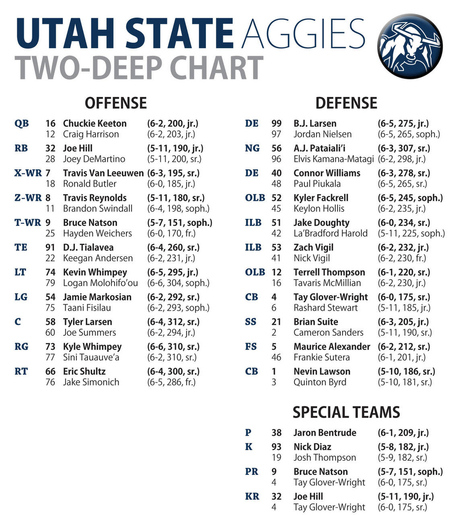