Mountain West bowl lineup could see a shake up

The Mountain West could see a change in where they play their future bowl games, and also who their opponents will be.

Share All sharing options for: Mountain West bowl lineup could see a shake up

The bowl scene for the Mountain West is taking a change as the Pac-12 and Big Ten recently made a few announcements to their own bowl lineup. The first news is that the Pac-12 is leaving the New Mexico Bowl after just one year, per Jeremy Fowler of CBSSports.com:

The Pac-12 is not expected to renew its contract with the New Mexico Bowl when it runs out after this season, according to two sources. Conference USA will likely replace the Pac-12 and play the Mountain West Conference for the 2014-19 cycle, according to a source.

There is no word yet on what level of Conference USA opponent would be joining the Mountain West as a dance partner in Albuquerque.

The reason for the Pac-12 to ditch playing the fifth or sixth Mountain West team is due to the chance to jump in on the Buffalo Wild Wings Bowl where they will face a Big 12 team. It is too bad that the Mountain West could not jump on that chance to place their champion in Phoenix against a Big 12 team. 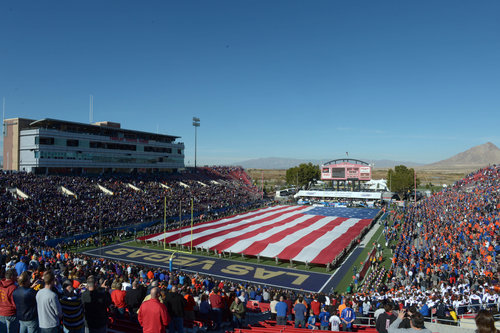 The other news involves the Christmas Bowl which has been a thing for a while, and they are interested in making the Mountain West their anchor conference with the possibility having having either their first, second or third team in Los Angeles.

The opponent on the other hand could be a mix of playing former Mountain West counterpart BYU, the Pac-12, Conference USA's champion or a team from the American Athletic Conference. Here is the possible lineup for this not yet sanctioned Christmas Bowl:

As far as conference alignments go, The Christmas Bowl has plans to secure the Mountain West as it's ‘anchor' conference. Hopefully featuring the MWC's one, two, or three selection. The Christmas Bowl is now negotiating to secure the 2nd or 3rd selection from the American Athletic Conference and the 7th selection from the PAC 12 Conference, to play the Mountain West in an alternating schedule (3 years each conference) in the Christmas Bowl 2014-2019. The bowl is also working with CUSA to utilize its #1 selection, in a potential 3 year arrangement, to play the MWC representative, in the event the PAC 12 #7 is not available.

So where does BYU fit into all of this? The Christmas Bowl is currently seeking a one or two-year agreement between the Cougars and the bowl game. The bowl is very impressed with BYU's consistent bowl eligibility and ability to sell tickets, especially in Southern California.

Playing in Los Angeles is a good idea for the Mountain West, but playing one of their best teams against the No. 7 of the Pac-12 is not an ideal scenario. Playing BYU, Conference USA champion or one of the best teams fro the American is a better idea.

If the Mountain West gets into this bowl game they will then need to drop a bowl game, because right now they have five bowl tie-ins. The current tie-ins are Las Vegas Bowl, Poinsettia Bowl, Armed Forces Bowl, New Mexico Bowl, Hawaii Bowl and the Famous Idaho Potato Bowl. Assuming that the Mountain West is going to stick at five bowl games they will be more than likely dropping the Armed Forces Bowl, because the location in Texas does not make as much sense anymore now that TCU is not in the league.

The Mountain West would love to add more BCS-level teams to their bowl lineup, but with the new playoff forthcoming in two seasons, the bigger leagues are looking to align with like programs. Depending on what changes down the road the Mountain West currently has just one bowl game against a BCS team, and that comes in form of the Las Vegas Bowl going up against the Pac-12.

It is tough for the Mountain West to schedule a partnership with a BCS level team for a bowl game, mainly due to the perception of the level of play in the Mountain West. If the league is lucky enough to get a team from a top-tier league it is likely to be their fifth best team, and that might be a reach.

It really all comes down to television ratings and unfortunately most of the Mountain West teams do not bring that to the table. Boise State is the exception, but even they are not gigantic draws.