The Mountain West is in early discussions about setting up a scheduling partnership with the Pac-12.

Mountain West commissioner Craig Thompson has began early discussions with the Pac-12 about setting up a "best practices" arrangement in which the two leagues would regularly schedule football games against each other. The Pac-12 and Big Ten had a similar agreement, but that never came to fruition as it was canceled before it even began.

While the Pac-12 has not officially responded to the Mountain West, Thompson thinks the the league is receptive. The idea is to cut out on travel since the Mountain West and Pac-12 are the only FBS conferences out West, and scheduling road non-league games can be expensive when going to the Midwest and beyond.

The Big Ten and Pac-12 deal was struck down partly due to Notre Dame playing Stanford and USC every year, thus limiting those schools to 11 built-in games with now two difficult non-conference games.

The Mountain West does not provide the same beefed-up teams that the Big Ten has -- aside from Boise State -- so this idea could have some legs. If USC were to play a team like Colorado State they could still go out and get another big name non-conference game to complement Notre Dame. 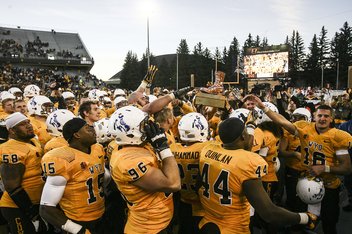 Which teams got the early nod from ESPN?

This could certainly work even with the Pac-12 at nine conference games. The league would get a built-in non-conference game and likely an opponent that would not be so overpowering as to make a schedule all that difficult. The Mountain West obviously gains a marquee game, for the most part, every year, so their benefit is greater than the Pac-12's.

The two leagues already have partnerships in the Las Vegas and New Mexico Bowl, so the two leagues have something going on there. The main chip could be that the Mountain West's television deal now includes a decent number of games on the ESPN family of networks.

This idea could work, but who really knows if the Pac-12 will want to partner with league that is perceived to be beneath them. However, this deal would allow USC and Stanford to still have a non-threatening non-conference schedule that includes Notre Dame, except when Boise State is on their docket, but that is not going to be all that often. There should not be any complaints from the other Pac-12 schools in terms of playing an over the top non-conference schedule by having a 10th game built into their schedule which comes from the Mountain West.

Having a non-conference game in stone will eliminate having to play a FCS school by either league, and if this is going to go down do not expect it to begin until at least five years down the road.