Wyoming vs. Hawaii final score: Cowboys win a wild one in overtime over Warriors, 59-56

Wyoming and Hawaii combined for 1,417 total yards and scored 115 points in a very exciting game not many people saw.

Share All sharing options for: Wyoming vs. Hawaii final score: Cowboys win a wild one in overtime over Warriors, 59-56

Too bad not many people saw this game since it was shown online only, but for those who found this game were given a nice big treat of points upon points. Wyoming outlasted Hawaii 59-56 in overtime to get their fifth win of the year, and somehow are still in the running for a bowl game if they get past Utah State next week.

Just take a look at the team stats, and just be amazed. 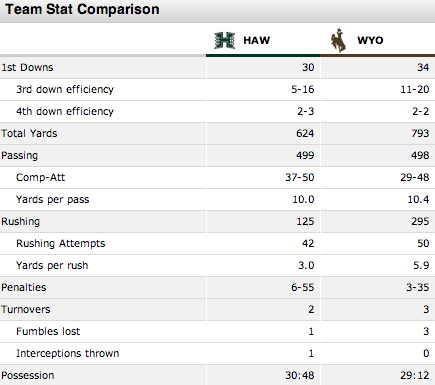 As for player stats, Wyoming quarterback Brett Smith completed 29 of 48 passes for 498 yards and seven touchdowns, and he rushed for another 142 yards and a score. His counterpart Scott Schroeder was equally impressive by converting 37 of 50 for 499 yards with six touchdown passes and he did have one interception.

This game featured 10 scoring drives lasting less than 2 minutes each, and Wyoming's 793 total yards was a Mountain West record and the second most by a team in the NCAA this season.

This has a game with little defense yet the defenses did force five total turnovers in this game, so they did step up to make a few stops in this game.

Hawaii was in decent shape in the fourth quarter as they were up 48-42 in the fourth quarter, but Wyoming went on to score two straight touchdowns to go up by eight with less than three minutes in the game. Hawaii responded with a quick score where Schroeder completed a 33-yard tying strike to Chris Gant, and the two connected again on the two-point try to send the game to overtime.

Wyoming was able to kick a field goal in the extra frame, and Hawaii was unable to get any points, thus giving the Cowboys got the win. The win for Wyoming does keep head coach Dave Christensen off of the hot seat -- well kind of -- but something must be done for their defense. They have allowed an average of over 50 points per game over their last five.