The Falcons elected to not pass the ball at all in their 21-7 win over Hawaii.

Air Force had trouble moving the ball early on and trailed 7-0 after Hawaii scored when Clark Evans was on the receiving end of a 26-yard touchdown reception from Jeremy Higgins. That would be the only points that the Warriors would put up all night. Speaking of Higgins, he started in place of Sean Schroeder, and on the night he went 14 of 23 for just 125 yards, Schroeder came in the game late but went 0 for 4 passing.

Air Force finally got on the board midway through the second period when Wes Cobb scored on a 2-yard run to tie the game. The other two scores would come in the third quarter, one by Cobb, and another by Cody Getz.

This was the game that Getz needed to get back on track, and it looked like his ankle was completely healthy, or very close to being so. Getz rushed for 125 yards, his first game over 100 yards since he rushed for 204 yards back on Oct. 4 against Navy.

Overall, this was a sloppy game, and even though Air Force rushed for 338 they barely controlled the time of possession, Air Force won it 31 to 28.

The fun stat of the game is that Air Force elected to not throw the ball at al against Hawai'i. With Hawai'i being as bad as they are against the run, the Falcons decided it was not worth throwing the ball. 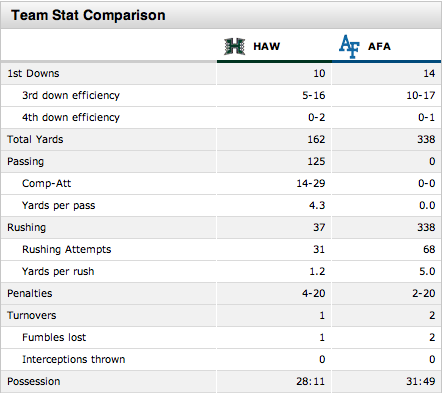