Already this offseason, we've looked at the most common version of strength of schedule (SOS).  However, not all win-loss records are equal. A 7-6 Arkansas team was probably a better team than a 7-6 UTEP last year, but that isn't reflected onto the traditional SOS.  This is where F/+ rankings can (hopefully) fill the gap.

F/+ rankings are the official measure of ranking at College Football Outsiders.  They combine both S&P+ ratings and Fremeau Efficiency Index (FEI).  In-depth explanations of these can be found here, but essentially F/+ ranking are the culmination of every non-garbage time play.  I'm not going to argue that F+ is without its flaws.

Arkansas is the perfect example of how the F+ rankings can be used to show how a team may have been better than their record, while also illustrating how they might be ranked too high in F/+.  Arkansas finished with a 7-6 record last year, but finished ninth in F+ rankings!

By adding up the final 2014-15 F/+ rankings of each of the Mountain West's FBS opponents, a more accurate SOS picture should emerge.

In this scenario, the lower the number the better.  Playing Ohio State is worth one point while a game against Eastern Michigan is worth 128 points.  Coincidentally, Mountain West teams square off with both the highest and lowest ranked F/+ teams. 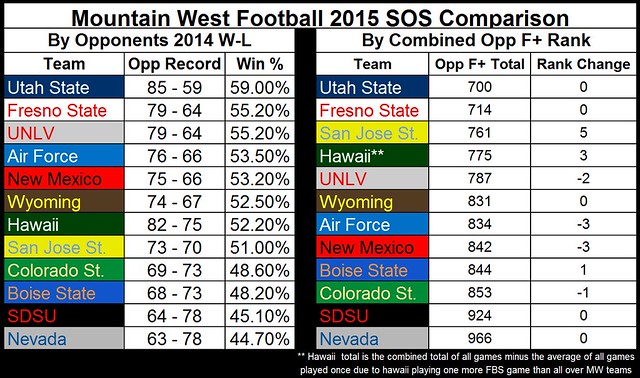 Utah State and Fresno State still sit atop the conference, though the margin between them is pretty slim. Fourteen spots in the rankings is the difference between playing Boise State (21) and Louisiana Tech (35).  San Jose State receives the biggest jump thanks in large part to games against Auburn (7), Boise State (21) and BYU (48).  Similarly, Hawaii received a major boost from its two Big Ten match-ups against Ohio State (1) & Wisconsin (25).

In the Mountain Division, both Air Force & New Mexico's F/+ SOS rankings are dragged down by out-of-conference foes Army (121 vs AF), Tulsa (117 vs. UNM), and New Mexico State (124 vs. UNM).  San Diego State & Nevada have the easiest schedules in the conference, playing five and six teams who rank among those in the triple digits, respectively.

Overall, the F+ SOS rankings provided a clearer picture into this year's schedules. There is no way to know whether a team will outperform (or under perform) its 2014 F/+ ranking, but for now, in the desolate place that is the offseason, it provides a picture of what's to come.