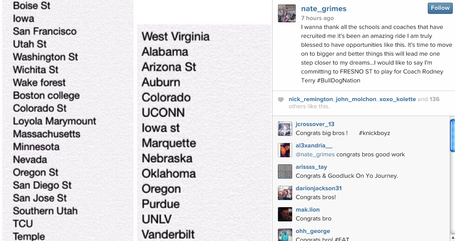 Grimes is rated as a three-star, per Rivals, and the offers have been rolling in, and Fresno State stayed in the mix with teams such as Iowa, Wichita State, Oregon State, New Mexico, San Diego State and plenty of others was due to the fact that the Fresno State coaching staff was at nearly every game that Grimes played in last summer.

"Coach Terry, he offered Nate way back," Grimes Las Vegas AAU coach Lamar Bigby told the Fresno Bee. "All July, the staff was at every single game Nate played. Rodney Terry only missed one game and if he missed a game his two assistants where there, so you can imagine how hard they recruited the kid."

Of course Bigby is high on on of his better players, and sees the potential for Grimes to be one of the best players in the Mountain West.

This is a huge get for a Fresno State basketball team that has not much success on the hardwood, and this could be a springboard for the Fresno State program to take the next step.

If the number of interested schools doesn't say enough about Grimes, check out the video below. It looks like the Bulldogs got themselves a big man with some handles.