An inside look at the San Diego State Aztecs' youthful safeties. High degree of athleticism, low degree of experience.

Aztec head coach Rocky Long continued to express frustration during the 3rd day of practice this week. While the team appears focused at large, Long is quick to point out to his team that his expectations are much higher than where the team is at today. Part of that is likely a result of not having full pads at this point of the practice schedule, thus limiting to a large degree the ability to adequately view talent and make depth chart decisions.

As the head coach and defensive coordinator, Long has expressed great concern over the situation at the safety position. Two of last season's starting safeties, Nat Berhe and Eric Pinkins, have a new home in the NFL. Both were outstanding performers in the Aztec's 3-3-5 defensive scheme. The 3-3-5 defense is difficult to prepare for and tends to keep the opposing offense off-balance. It can be very effective when it's clicking on all cylinders, but it does require special athletes to make it work consistently. Today's offenses are dynamic and often appear to have the advantage over defenses, so anything that might confuse teams is usually a good idea.

So let's take a look at the playmakers that the Aztecs are counting on to become the next generation of star safeties. 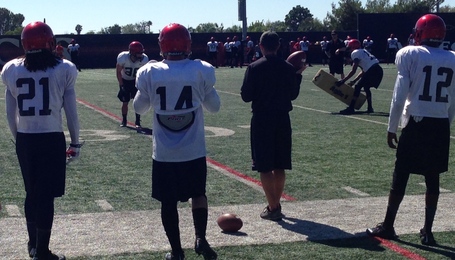 Na'im McGee (#21), 6'0" 200lb appears to be the clear cut front runner for the "Aztec" safety position after joining the team for spring camp in January. McGee is a junior college transfer from Diablo Valley Junior College, the same college that QB Quinn Kaehler transferred from. His role is to replace Nat Berhe at the Aztec position. The "Aztec" is typically a very fast and athletic safety who is able to prevent long runs, passes, and yards after the catch. When asked about the importance of having McGee back on defense, coach Long said, "Well he has a little bit more maturity and he has played more games, but he hasn't played in our system. The safeties have a very complicated assignment challenge in our system." The Oakland product was a first-team all-conference selection in his lone season at Diablo Valley College where he had 32 tackles (20 solos), four interceptions and a fumble recovery for a touchdown.

Malik Smith (#12), 6'0" 185 lb sophomore, will likely be one of the two "Warrior" safeties. "The Warrior" position is hybrid of a safety and a linebacker. The "Warrior" must be skilled enough to be able cover the best wide-outs in a man to man situation.  Smith, out of Dominguez High in Compton, CA, showed steady progress last year as a true freshman. By the end of the year he had found himself as an important back up at the position having played in 12 games and collecting 21 tackles (14 solos).

Trey Lomax (#14), 5'11" redshirt freshman out of Mira Mesa High in San Diego, will likely be the other starting "Warrior".  Lomax may be one of the best overall athletes on defense. In addition to football, he was also recruited to play baseball at San Diego State.

Christian Cumberlander (#2), 6'3" 205 lb redshirt freshman, may be the player to watch at the safety position. This Georgia product has just converted from Wide Receiver to the "Warrior" spot and is making some noise early in the fall camp. According to Long, "We didn't think he was going to be among two-deep at wide receiver, so we decided to move him to safety. He's got the size and the speed. Now, he didn't go through spring practice at safety, so he's starting off just like all the freshmen are; not knowing exactly what to do and how to do it. He's played corner in his past, but he's never played safety in his past."

Danny Gonzales, the safeties position coach, did an excellent job with Berhe and Pinkins and will have his hands full with the new safeties mentioned above as well as other possibilities including Stan Sedberry, T.J. Hickman, and Tyler Morris among others.

When asked to comment about the safety situation at the recent press conference, Long said, "I'm not comfortable that anybody can play for sure, but I'm comfortable that we've got really good athletes there. It's an interesting scenario because I've been here through the whole process five years ago when I first got here. We looked at safety, and there were actually three safeties total in the program, and we didn't think they were very good anyway, so we went out and recruited six freshmen - and all of them were seniors last year. The last couple years we've tried to replace them through recruiting, so we think we have some really good athletes playing those spots. Now they're going to get their chance to either be good or not good. I'm guessing they're going to be like our corners last year; they're going to be shaky early (in the season) and good late."

So in a nutshell, the safety position may be the greatest unknown for San Diego State football with only a few weeks left before the Northern Arizona game. But if safety coach, Danny Gonzales, can coach them up to be anywhere close to Berhe and Pinkins, we will probably be just fine.