Another fun day in San Diego, this time for a very good cause.

Coach Fisher announced to the team earlier this week that they would be taking part in the Ice Bucket challenge and couldn't have picked a better day than today with the heat bearing down in front of Hepner Hall. With the student body gathered around, the coaches, led by Steve Fisher, took their turn at the challenge and proceeded to challenge the men's basketball team and students alike. Coach Fisher did make a point, though, to remember what this was for and asked for everyone who could, to donate whether they took part in the ice bucket challenge or were merely watching.

ALS hits home for the team and Coach Fisher, whose son, Mark Fisher, an assistant for the team, was diagnosed with the disease three years ago. 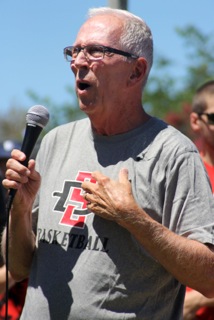 The team followed the coach's lead and took their turn as the ice water drenched them, making the biggest guys on campus scream and yell. Soon after, the student body took part as 50 or more students, staff and fans lined up for their own chance to take part.

In what was not only a great team bonding experience, it also helped to raise awareness for a very serious disease and allowed for the San Diego State community to do their part in fighting the disease. 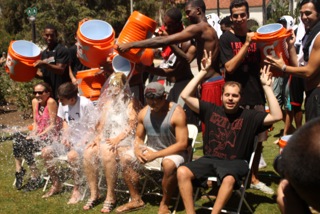 Fisher was reportedly challenged by Mighty 1090 AM radio host Scott Kaplan, but how did the rest of the team get involved?

Senior guard Aqeel Quinn said Fisher had called him over break and asked if he had heard about the challenge, and then decided to challenge the whole team. 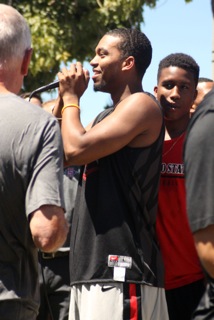 Fisher told the team at their first team meeting earlier this week that they would all take part in the challenge. Fisher's son Mark, who's an assistant coach on the team, was diagnosed with ALS around three years ago.

Quinn says that doing the challenge was a no-brainer.

"We see firsthand the struggles, the ups and the downs of it," he said.

Rex Pflueger, a 2015 shooting guard four-star recruit, was on hand to witness the ice bucket challenge and fan support from the Aztec faithful, in what should have helped the pitch for the potential Aztec.