FOOTBALL'S HERE YOU GUYS! It's a new season and there are new odds to incorrectly analyze...

All times in Pacific Time Zone.

My Pick-Broncos cover- This should be a wildly entertaining game that finishes up with one team winning by 3-4 points.

7:00 PM North Dakota vs San Jose State (-27), O/U=56- The fact that this game actually has a spread makes me concerned.  Now I actually have to make a decision.

My Pick-North Dakota covers- This should be a blowout, but I have a hard time seeing the Spartans winning by more than 21.

My Pick-Rams cover- It's a huge rivalry game and the Rams suffered a  heart-wrenching loss last season.  There's no way the same thing happens two years in a row, right?

7:30 PM UNLV vs Arizona (-23.5), O/U=60- I'm fairly confident odds-makers were going off of last year's game to make this year's spread.  Two things: 1. No Ka'deem Carey and 2. Wildcats did not name their starting quarterback until Sunday, and even after that, RichRod implied that he might play more than one quarterback.

My Pick-UNLV covers-  If you were listening to the Week One Podcast, you would know that this is my stupid upset pick of the week as well.

1:00 PM Montana vs Wyoming - NO ODDS - Oh come on! This is a good FCS team, with tons of history! Anything can happen, INCLUDING THE FIRST STEP TO BOHL-ING PUNS.

4:00 PM Northern Arizona vs San Diego State - NO ODDS - I would love to pad my stats here, but it would be like scheduling an FCS team for betting, sometimes lots of wins doesn't equal quality...

4:30 PM Fresno State vs Southern Cal (-22), O/U=58- The odds-makers are anticipating another blowout similar to the Las Vegas bowl last season.  Despite the quarterback situation only somewhat settled, and USC injuries/suspensions, I'm not sure if I completely agree with them.

5:00 PM UTEP vs New Mexico (-7.5), O/U=66.5- A nice little rivalry to kick off the season though neither team considers the other the "main rival." This Lobos team can get started on the right foot with a big win.

My Pick-New Mexico covers-  Sure Crusoe Gongbay has to sit out for a little while, but with such a heavy run attack against a team who ranked 120th last season in rush defense, the Lobos should have no problem winning this game.

7:30 PM Washington (-17) vs Hawaii - O/U=58.5- Washington has suspended their starting quarterback for this game.  Hawaii actually plans on sticking with one quarterback, plus they have a good 1-2 Hawaiian Punch with Joey Iosefa and Steven Lakalaka.  This game will be closer than anticipated.

My Pick-Hawaii...covers- If the Rainbow Warriors can maintain composure in this game, then they will be able to keep it close versus the Huskies.  One more tidbit Husky fans: Chris Petersen doesn't have a good record on the Islands...

4:00 PM Utah State vs Tennessee (-6), O/U=51.5- The Aggies travel to Rocky Top, Tennessee with a fully healthy Chuckie Keeton who's still looking for that signature win.  This has all the makings of: 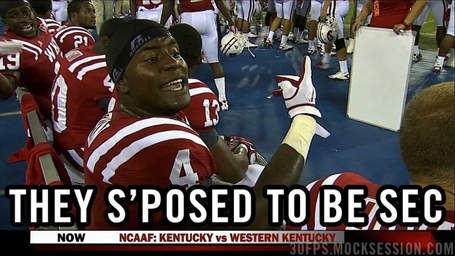 My Pick-Chuckie and the Aggies cover- I think a lot of questions will be answered about Utah State depending on the outcome of this game.