Season Opener Just a Month Away

With San Diego State's home opener against the Northern Arizona Lumberjacks just a month away, head coach Rocky Long had a little fun with the fans and helped them get excited for the upcoming season. A couple of hundred current and potential Aztec season ticket holders and dedicated fans turned out at Qualcomm Stadium Tuesday night to hear from the coach and participate in the activities.  The "Chalk Talk" event was emceed by former Aztec and NFL star, Ephraim Salaam. 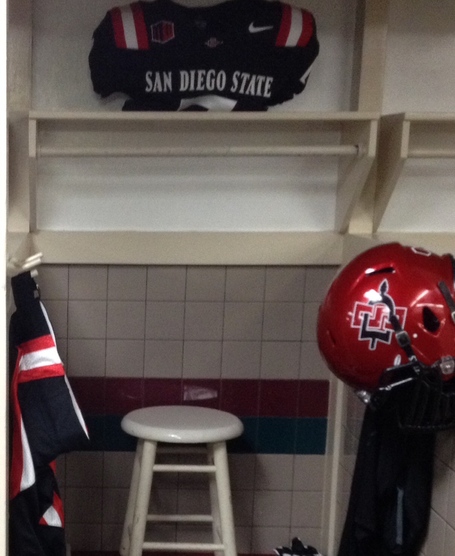 Salaam gained some new fans a couple of years ago when he teamed up with another former Aztec, Chester Pitts, for the 23rd season of "The Amazing Race". Salaam was selected by the Atlanta Falcons in the 7th round (199th overall) of the 1998 NFL Draft. The Falcons went 14-2 during Salaam's rookie season. He played a significant role in helping the Falcons get to their first ever Super Bowl, which they lost to the Denver Broncos in Miami. Salaam played a total of 13 NFL seasons for five NFL teams, including the Atlanta Falcons, Denver Broncos, Jacksonville Jaguars, Houston Texans, and Detroit Lions.

Salaam shared, "This is where it all stared for me. Coming here as a 16 year old freshman". While still at San Diego State, he told the crowd that during his senior year, the Super Bowl was played in San Diego. Salaam recalled that he was across the street during the event. "The night of the Super Bowl it was all lit up, there were fireworks and everything and I knew I had a chance to get drafted, and I remember closing my eyes and I said if I get drafted, will I ever get a chance to play in a Super Bowl? And one year later, 365 days later, I started in the Super Bowl in Miami...and the dream started right here." During his rookie season in Atlanta, he became the youngest player ever to play in the Super Bowl. 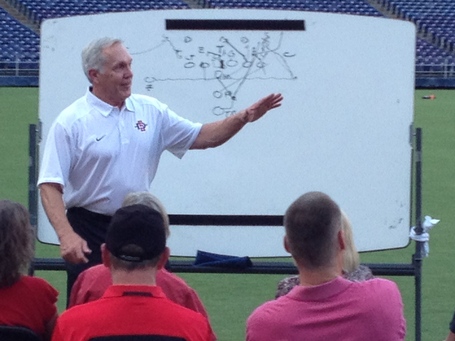 Salaam introduced Rocky Long as the Mountain West Conference's "winningest football coach in history". Long started by recognizing both Coach Brian Dutcher and Coach Justin Hutson of the Aztec basketball team who were both in attendance. "What Coach Fisher and his staff have done for San Diego State basketball is unbelievable." He added, "Basketball cares if we win, and we care if basketball wins. We care if the volleyball team wins. We hope the girls' basketball team wins. I've been in a lot of athletic departments and that is not the same way everywhere. The atmosphere here with basketball leading the way is...they win, that means everyone else is supposed to win with the support of everybody else's program."

Long noted that the basketball team has "great kids", and he believes the same is true for the football team. "I've been coaching for a long time, and I have fewer problems and fewer troubles with this group of kids than I have ever had before, and they can still play."

Coach Long then taught the crowd some of the X's and O's, and brought some of the attendees onto the field to run a few plays the Aztecs will use during the season.