San Diego State Basketball: Will Winston Shepard be the next SDSU player in the NBA?

Shepard entered college as a one-and-done hopeful but became a devoted college player last year. With Shepard, the "Will he be in the NBA?" question is more "when" than "if."

Share All sharing options for: San Diego State Basketball: Will Winston Shepard be the next SDSU player in the NBA?

Shepard thought for sure that he'd get drafted after his freshman season at San Diego State.

"Absolutely, no question," Shepard told the San Diego Union-Tribune's Mark Zeigler last January. "That was my dream. That was my goal. Anthony Bennett and I talked about that all the time. He would go to UNLV, I was going to San Diego State, and we'd meet up in the NBA (the following year). It worked out excellent for him, it didn't work out for me."

That quote was part of a piece Zeigler wrote about how Shepard matured the summer after his freshman year. Most SDSU players remained in San Diego to work out during the summer, but Shepard asked the coaching staff if he could go home to Houston. Home with his mother's cooking and the small, Baptist church gym he worked out in as a kid, Shepard refreshed his whole attitude about college basketball and about earning what you want.

With a new attitude and a summer working out at the LeBron James and Kevin Durant Skills Academies, Shepard became a whole new player for the Aztecs last season. Let's compare some numbers. As a freshman, Shepard averaged 5.7 points, 3.5 rebounds and 2 assists on 39.3 percent shooting in 20.3 minutes per game. Last year, the Houston native averaged 11.6 points, 4.9 rebounds, 2.1 assists and a steal on 41.2 percent shooting in 26.6 minutes per game. He also increased his free-throw percentage from 57.6 percent to 63.4 percent.

More than just throwing up big numbers, Shepard became a leader for the Aztecs.

"If you were to say from a year ago to right now, who's made the greatest different in terms of impact on himself and his teammates and his game, it's Winston," Coach Steve Fisher told Zeigler.

Now the upperclassman Shepard will need to become even more of a leader for a team that's losing its biggest component from last year. And it seems Shepard, almost 21 years old, is embracing that leadership role. For instance, Shepard recently helped out at Steve Fisher's summer basketball camp, showing up to coach the young San Diego kids who idolize him. 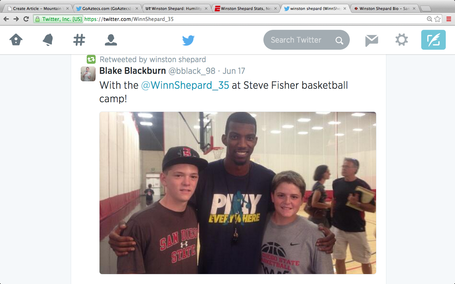 But what about the NBA? Shepard will play in the NBA one day--that's not the question. Whether it's after his junior or senior season--that's the question.

He's a tall, strong and versatile player. Standing at 6-foot-8 and weighing 205 pounds, Shepard can battle big bodies down in the paint and hog the boards--especially the offensive boards. But Shepard is also an adept ball-handler and will run the point quite often for the Aztecs next year. He can also play off the ball, running cuts and using his big body to set screens for the pick-and-roll.

Shepard's natural positions are small forward and power forward, but with his skill set, Shepard can play any position on the court--including center, which he played at select times this season. NBA scouts salivate over versatile players like LeBron: "power guards" or "point forwards" that can play every spot on the floor. Shepard is that type of prospect. No, I'm not saying he's LeBron. But I'm saying he definitely fulfills the "power guard" or "point forward" requirements.

Like his front court cohort Dwayne Polee II, Shepard is remarkably athletic and lengthy. He used those gifts to his advantage on the defensive end, averaging a steal per game this past season, and was often subbed into the game last year for defensive purposes. He can also defend any position, just like he can score from any position. He's surprisingly strong in the paint and can box out centers (Remember how he's a hog on the offensive boards?), and he's quick and long enough to disrupt a point guard's game on the perimeter.

Shepard also excels in transition, but not how you'd expect. You'd expect a 6-foot-8 super-athlete to show off his skills and throw down acrobatic dunks in transition. Shepard can do that, but he's actually better as a facilitator in transition, throwing the perfect lead pass or lobbing up an accurate lob for an explosive alley-oop.

With his athleticism, Shepard can get to the rim almost any time he wants, but he struggles mightily to finish through contact. I heard a commentator on CBS Sports say this about Shepard and I couldn't agree more: he's a million dollars at getting to the rim, but he's a dime finisher (or something like that). You wouldn't expect him to struggle at the rim because of his strength, but just watch game film from last year: the ball just doesn't want to go down when he soars to the crowded rim.

Shepard also has an inconsistent jump shot. I was praising him earlier for being able to PLAY any position, but he really needs a consistent jump shot to be able to EXCEL at those positions. At times this year, Shepard would rise up and hit nothing but net. Other times he'd hit nothing but backboard. And other times he'd hit nothing. I remember seeing a tweet suggesting that Shepard is 10,000 jump shots away from being NBA-ready. And it's true. Shepard has good shooting form, but he needs much more repetition to attain consistency--what he missed last year.

So there are the strengths and weaknesses Shepard showed us all last year as a sophomore. We just have to wait and see if he improves upon those weak spots enough to declare for the NBA after his junior year or if he'll play all four years. We also must consider if he'd even want to leave after his junior year. SDSU wide receiver Ezell Ruffin would be in the NFL right now if he had declared for the NFL draft after last season. But he wanted to play his senior season at SDSU and be a team leader. SDSU does that to athletes--they're truly proud to be Aztecs.

But once again, we'll just have to wait and see.