UNLV and San Diego State know their regions, but take a look at the complete field of 64.

As expected, the Mountain West landed two teams in the NCAA tournament with UNLV heading to the Lafayette, Louisiana, region and San Diego State going to the region in Corvallis, Oregon. That is just a small portion of the baseball tournament field which begins play on Friday.

UNLV has the toughest draw of the two Mountain West squads because if they want to advance to the Super Regional round they will have to get past the nation's No. 1 seed in Oregon State. San Diego State is the two seed in their region and has a slightly easier path by playing Mississippi State in their opening game and the national seed in their bracket is No. 6 Louisiana-Lafayette; that is still difficult but not as a tough as UNLV has it.

Take a look at the complete bracket which is below to -- gasp -- look ahead at who UNLV or San Diego State could play if they advance past this opening round. 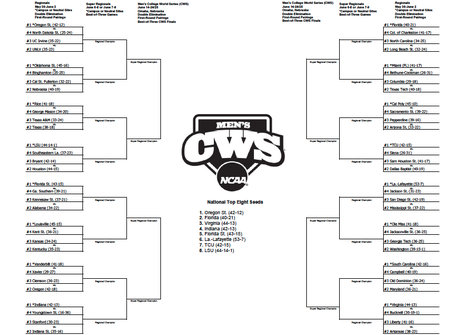