Nevada will open up against Seton Hall in the 2014 Paradise Jam tournament.

Share All sharing options for: 2014 Paradise Jam bracket: Nevada to play Seton Hall in first round

The bracket is set for the 2014 Paradise Jam tournament, and the Nevada Wolf Pack know their first round opponent, the Seton Hall Pirates. Nevada has known they were going to play in the preseason tournament, but their opponent has been a mystery up until today.

The tournament takes place from Nov. 21 through Nov. 24, and the opening round game tips at 5 p.m. ET and can be see on the CBS Sports Network. Games not CBS Sports Network can be seen online at ParadiseJam.com, but if Nevada wins their games will air on television, but once they lose -- and are not in the third-place game -- they will be online.

Here is the complete bracket: 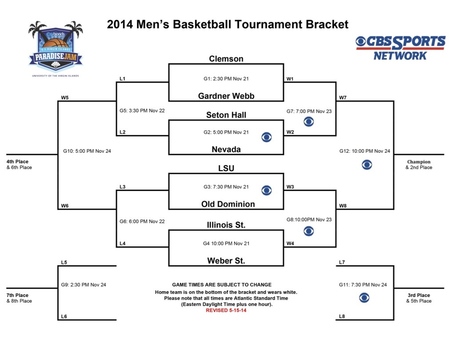 Nevada lost Cole Huff who transferred to Creighton and Deonte Burton is off to the NBA, so the Wolf Pack are down their two best players heading into next season. Seton Hall was not all that special last year as they finished 17-17 overall and was just 6-12 in the Big East.

Seton Hall could be worse than last year as they lose three of their four leading scorers from last year, and their best player is guard Sterling Gibbs who averaged 13.2 points per game and 4.2 assists.