Hawaii Football: Three Keys to a Warriors' win over Rice

The 'Bows have fallen to 1-3 after going through the Pac-12 gauntlet to start the year, can they bounce back and grab some momentum before starting MWC play?

Share All sharing options for: Hawaii Football: Three Keys to a Warriors' win over Rice

The bye week couldn't have come at a better time for Coach Norm Chow and Hawaii, especially after the terrible offensive performance against Colorado. The 'Bows scored on just four drives vs. the Buffs, punting or turning the ball over on the other 11 drives. UH's offensive efficiency ranks 120th out of 128 FBS teams, and because of that, Scott Harding has punted the ball away too many times this year. In fact, Scott Harding has accumulated more punting yards than the UH offense has total yards. Harding has punted 34 times for a grand total of 1,433 yards, while the Warriors offense has accumulated 1,419 yards through the first four games. Hawaii needs some momentum before jumping into conference play, and they'll have a big chance with a trip to Rice coming up this weekend. Three keys to a Hawaii win over the Owls:

Run the offense through Steven Lakalaka

The majority of the offensive struggles have been through the air, but what success the Warriors have had has come on the ground this year. Joey Iosefa posted almost 200 rushing yards through the first two games of the year, on pace for his first 1,000-yard year at Hawaii before going down with an ankle injury vs. Oregon State. Since then, Steven Lakalaka has picked up the slack out of the backfield, matching, and topping, Iosefa's numbers the past two games. So the answer is there: Lakalaka is, and will be a suitable replacement for Iosefa going forward. The thing is, Coach Chow has been pass happy to start the season. Ikaika Woolsey has thrown almost 150 passes this year, only completing 45% of those. Even with Woolsey's inaccuracies and poor offensive output, Chow continues to try and push the offensive attack through the air. You need to give guys like Lakalaka and Diocemy Saint-Juste a heavier workload if the Quarterback situation isn't improved by the end of the weekend, whether it's 5 more carries or 10 more carries, just do something to get some points on the board.

Shut down Jowan Davis and the Rice rushing attack

The high point for this team so far has been the new 3-4 defense under new DC Kevin Clure, creating a ton of pressure in the backfield and are among the best rush defenses in the MWC, allowing just 3.3 YPC this year. The front seven has allowed just one 100-yard rusher this year in Storm Woods, but Jowan Davis could join that list with a big game on Saturday. The sophomore from Sealy, Texas has racked up 400 yards on the ground this season, coming up two straight 100-yard performances against Old Dominion and Southern Miss. It comes down to containing Davis and the Owls running game, and the Warriors chances to take home a win increase dramatically.

It's been progressively getting worse at the quarterback position for Hawaii. An artist depiction of how the QB situation looks right now. 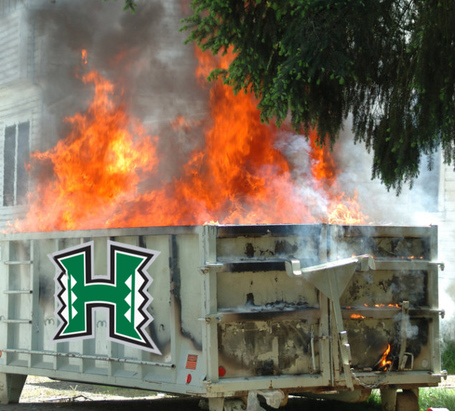 Rough, I know. The first drive of the season has probably when the Warriors offense has looked its' best, since then, pretty much downhill. UH has scored six touchdowns six that opening drive, with just one coming through the air. Woolsey has been getting a shorter and shorter leash with Norm Chow the past two games, leaving the game in favor of Jeremy Higgins in the third quarter or each loss, so the possibility of a QB controversy started to arise. However, it was announced last week that Higgins would be done for the year, and the rest of his UH career, with a fracture in his throwing hand he sustained vs. Colorado. So what to do about the quarterback now? Well, you still have Woolsey, Taylor Graham (who made his debut against CU with an Interception into double coverage), and true frosh Beau Reilly. Woolsey is still the guy to run this offense for now, possibly cause Chow is still a little gun shy to put Graham as his QB again after his terrible 2013 season. Integrate all three quarterbacks into the offense early. I don't see why not. It would be better than Woolsey sitting out there for two and half quarters and constantly over/underthrowing his receivers. If he's struggling, don't hesitate to throw Graham in there, or even Reilly.

Hawaii desperately needs to pick up the offense. Field Goals are great, but Tyler Hadden can't sustain the 'Bows offense going into conference play. Want to have chance to compete for a bowl berth, Coach Chow? There is no reason to pass it 50 times a game when your quarterbacks only complete 40-45% of those passes. That is what's killing the offense. You have players like Lakalaka, Saint-Juste, and even Scott Harding that you can utilize in different ways rather than sending them on a fly route every two plays. This Saturday's game vs. Rice is very winnable, but for the Warriors to cap off non-conference play on a high note, the Warriors offense needs to score. The defense can't do it all, but if what we've seen from Woolsey and the offense continues, they'll carry the workload once again this weekend in Houston. Rice 28, Hawaii 20