The NCAA tournament bracket has been announced for the college baseball postseason. As expected, no Mountain West team is playing host in the first round, nor did any earn a national seed. Three teams were in the mix for a tournament berth in New Mexico, San Diego State and UNLV.

San Diego State earned the Mountain West's automatic bid by winning the Mountain West conference tournament over UNLV, 4-3, on Sunday night. UNLV was a safe bet to make the NCAA tournament, so their loss only hurt their placement and seeding. Having a top-30 RPi helped the Rebels secure an at-large bid.

New Mexico was a bubble team but getting knocked out early in the conference tournament to Nevada sealed their fate, but had they made it to the title game, or even to the semifinals they likely would be in the field of 64.

The regional hosts were announced Sunday night, and of course the Mountain West did not earn a right to host, or be a national seed.

UNLV will be heading to the Corvallis regional as the No. 2 seed and play No. 3 UC Irvine 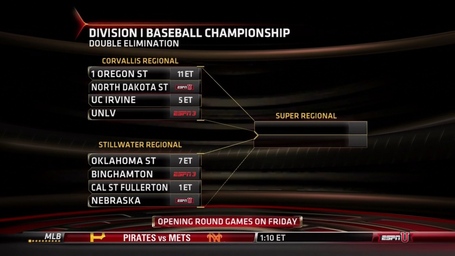 San Diego State will be heading to the Lafayette regional as a No. 2 seed: 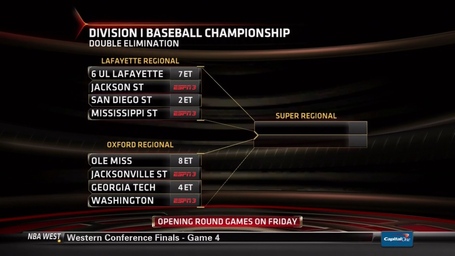