There are three teams left in the Mountain West baseball tournament.

There are now just three teams left in the Mountain West baseball tournament: No. 1 UNLV, No. 3 San Diego State and No. 4 Nevada. The winner gets an automatic bid to the NCAA tournament, but UNLV is already guaranteed a spot even if they don't win this tournament.

As for San Diego State and Nevada they both must win this tournament to get a chance to go to Omaha, Nebraska, for the College World Series. That will require either of those two to top UNLV twice, and that seems unlikely not only because they are the top seed but also because the Rebels are at home.

Nevada and San Diego State play in the semifinal elimination game. The two have yet to play in this tournament, and Nevada had to play two games on Friday, including an 11-inning game against New Mexico to advance. San Diego State fell to UNLV 5-4.

The winner of Nevada vs. San Diego State takes on UNLV in the night cap and if the Rebels win that game then they are the tournament champions, but if they lose there will be a winner take all game on Sunday afternoon.

Here is the updated schedule and results so far. Also, don't forget that all games and highlights can be streamed on Mountain West Connection.

Sunday, May 25
If Necessary Championship Game - Same teams as Saturday 7 p.m. game if both have one loss, 1 p.m. PT 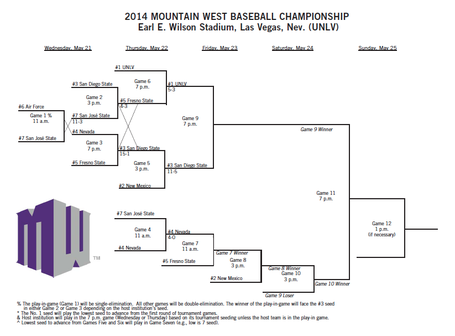