San Diego State and Ohio State can be seen on either ABC or ESPN2 depending on what part of the country one lives in.

The much anticipated matchup (at least for Aztecs fans) between San Diego State and Ohio State is one that is not likely to be close if one listens to the oddsmakers. The Aztecs are coming of an embarrassing loss to Eastern Illinois, while Ohio State did get a win over Buffalo it was not as impressive for the No. 3 ranked team in the country.

San Diego State needs to have running back Adam Muema at full strength in this game to keep the offense balance, and to give the unit a threat to move the ball. Quarterback Adam Dingwell can not throw the ball over 60 times and expect to win, and really the offense probably should be throwing the ball around 40 times max.

On defense, Aztecs head coach Rocky Long has had success in his two matchups against Urban Myer when the two were coaching at New Mexico and Utah. San Diego State does have some very good defensive players to make Ohio State work for their points.

San Diego State needs to play a very good game if they are even to be competitive. If they are going to get the win they need to play great, and have some luck on their side.

Location: The Horsehoe in Columbus, Ohio

Here is the coverage map: 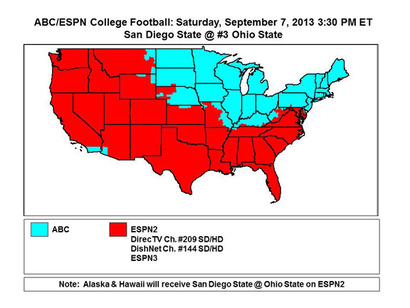