Wide receiver Charles Lovett is doubtful to play against Tulsa with a bum knee.

The initial injury report about Colorado State's leading wide receiver Charles Lovett was positive, but then it took a turn for the worst as he is likely not going to be traveling with the team when takes on Tulsa this Saturday. Lovett injured his knee and missed the season opening loss to Colorado, and on Wednesday head coach Jim McElwain said that he is doubtful:

"From an injury standpoint today, right now, I'd say [Joe] Hansley's doubtful," explained McElwain. "Lovett's probably doubtful; tried to go today, didn't see the juice we were looking for. And Donnell [Alexander], readjust him tomorrow at the hand specialist, and should have a better idea there. Not saying that they probably couldn't go, with a certain boost here and there, but you know what guys, life's too short. It's not worth anything from a life-altering deal down the road and so, I just don't believe in doing that to players. When they're ready, their bodies will tell them."

With the likelihood of Lovett missing Tulsa puts a damper on the Colorado State offense as they are going to also likely miss fellow wide receiver Joe Hansley. Plus, running back Donnell Alexander is going to be out with his hand injury. Those are three key weapons for the Rams to be without, and could make for a tough matchup against Tulsa. 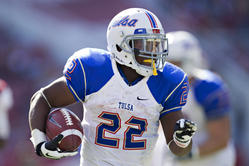 Can Colorado State get their first win of the year?

Lovett was the teams leading receiver in 2012 and Hansley had a huge performance against Colorado last week by hauling in eight catches for 91 yards, plus he was key on special teams with a 74-yard punt return touchdown. Missing Alexander is not quite as big since Colorado State has Chris Nwoke and Kapri Bibbs to run the ball.

It seems that McElwain wants to hold the players back as to not further them getting more hurt, or to hamper their recovery and have another setback that could have these players sidelined even longer. Colorado State will need other players to step up if they are going to get their first win of the season.