Turnovers on offense, blown coverage on defense, and sketchy officiating nearly doomed the Bulldogs in Hawaii. Fresno State led 42-3 in the third quarter and held on for a 42-37 win.

Share All sharing options for: Fresno State vs Hawaii: Recap and Takeaways.

This game was decent for 3 quarters for Fresno State. Then it was putrid. This recap will be less formal because the game was so bad that I don't feel it deserves real formality.

It started on a relatively high note for the Bulldogs. They jumped to a quick 21-0 lead early in the second quarter off of a 30-yard TD pass by Derek Carr and two TD runs, one by Marteze Waller and one by Carr. Then the offense stagnated a bit and they failed to score the rest of the half, possibly helped by the ejection of Isaiah Burse, which I will discuss later on. Hawaii tacked on a field goal late in the second quarter to make it 21-3.

The Bulldogs came out after the half and scored three straight touchdowns, one off another Carr to Harper connection, one more Marteze Waller TD, and an interception return for L.J. Jones. After that it was all Hawaii, as the Warriors roared back with Sean Schroeder in throwing the ball like a madman to close the gap to 42-37 before another L.J. Jones interception ended the game. Schroeder threw for 321 yards on 17 of 27 attempts and 3 TDs.

Here are my takeaways for this game:

Fresno State has to take better care of the ball: Fresno State fumbled four times. Marcel Jensen, Davante Adams, Joshua Quezada, and Greg Watson all put the ball on the ground. Three of them were lost. The only offensive skill player doing a good job of securing the ball was Marteze Waller. Carr threw two interceptions. One of them was a deflection that went sky-high, and the only person who made an effort to bat it down was Carr himself. The other was a miscommunication between he and Davante Adams.

Without the constant turnovers in the second half, this game wouldn't have been close.

Veteran Wide Receivers have to step up: Davante Adams basically disappeared in this game. Josh Harper was the only veteran doing well at all and even he had some crushing drops. The loss of Isaiah Burse was huge. Sophomore Aaron Peck performed well and caught three passes on three targets for 57 yards. We will see more of him from here on out. Carr was off and on. He got little help from his WRs, sure, but he made some head-scratching throws. He finished 33 of 47 for 324 yards, 2 TD, and 2 INT.

So does the secondary: The Bulldogs' secondary imploded in the second half. After Dalen Jones misplayed a ball in the air that should have been a pick, the floodgates opened. The DBs were out of position, whiffed on tackles, and played the ball in the air terribly. Yes, L.J. Jones had two picks, but he also blew coverage on at least one TD.

OC Sports needs to get better announcers: The announcers for this game were ridiculous. They almost made it into the "so bad it's good" category. Almost. Both incessantly called Derek Carr "David". Robert Kekaula apparently thinks "Micenheimer" is pronounced "Mishen". Also, the only adjective he ever learned is apparently "quality". I would suggest a drinking game involving the frequency of his usage of that word, but alcohol poisoning would be swift. Meanwhile, Dick Tomey spent much of the game defending the referees in the face of increasing incompetence from them.

Shame on the Mountain West for hiring these referees and replay officials: These referees were beyond horrific. There is no defense at all for some of the calls that were made. This was a display of gross incompetence of the highest order. There were too many botched calls of every kind to list, but here are some of the most egregious:

The worst, in my opinion, and also the only one I could get a screenshot of is the following. Credit for the base picture goes to Jordan Brown (@JordanTBrown) on Twitter. On second and goal at the Hawaii 1, Marteze Waller ran the ball into the end zone. 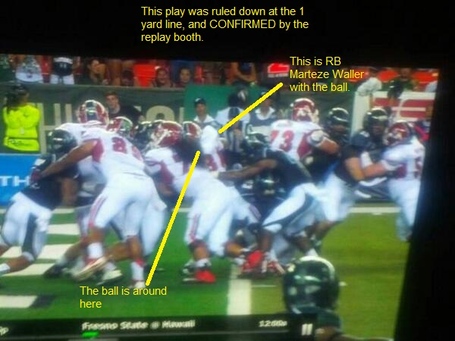 The last time Fresno State was in a game with officiating this bad was in Oregon in 2005. The Pac-10 issued an official apology then. Friday's game between San Jose State and Utah State was horribly officiated as well. Something is wrong in this conference.

Bulldogs find a running game: Fresno State rushed for 206 yards on 4.6 yards per carry against a Hawaii front that had been holding its opponents to 3.1 yards per carry previously. Marteze Waller was the best on the night, with 22 carries for 95 yards and two touchdowns. Quezada had 13 for 78, but also fumbled.

The defensive front 7 were on fire: Fresno State held the warriors to just 1.5 yards per carry. Charles Washington, Patrick Su'a and Nat Harrison had one sack each, and Ejiro Ederaine and Donavon Lewis both had two. The guys up front did their job.

Still a win: It may have been very, very, ugly but the Bulldogs escaped with a win. And a win is a win. There is a LOT that needs to be fixed though.

Fresno State heads to 1-4 Idaho next week to play the Vandals.