USC vs. Utah State: Getting to know the Trojans

To get to know USC better we reached out to Conquest Chronicle to answer our burning questions.

Share All sharing options for: USC vs. Utah State: Getting to know the Trojans

To get to know the USC Trojans before they take on the fighting Chuckie Keeton and his Utah State Aggies, we reached out to the good guys over at Conquest Chronicles to answer some questions we had about the Trojans. Make sure to check them out on game day for more of their coverage on this game.

1. USC seemed to get back on track in their 35-7 win over Boston College, so is everything finally settling in for the Trojans?

I wouldn't say everything is settling in for USC after just one strong performance on both sides of the ball. But it certainly was a welcome sign that the passing game actually looked decent. The problem in gauging the game against Boston College is they really aren't that great of a team to begin with, and again, it was just one game. USC still has a number of areas where it can improve, too, most notably penalties (USC is tied for 110th in the nation out of 124 FBS teams in total penalties). Against much better teams, those mistakes will come back to bite the Trojans.

2. Is the quarterback situation actually settled at USC with Cody Kessler as the starter?

Yes, I believe so. You can't have two quarterbacks; otherwise, you have none. For those watching at home, USC had no passing game at all at Hawaii and vs. Washington State. Then coach Lane Kiffin anoints one the starter and it's a whole different story. The redshirt sophomore even admitted as much during practice leading up to the Boston College game that it was as if Kiffin had given him the keys to the team. Kessler looked much more confident and decisive, and it showed in his play and stat line: 15-of-17 for 237 yards and two touchdowns. 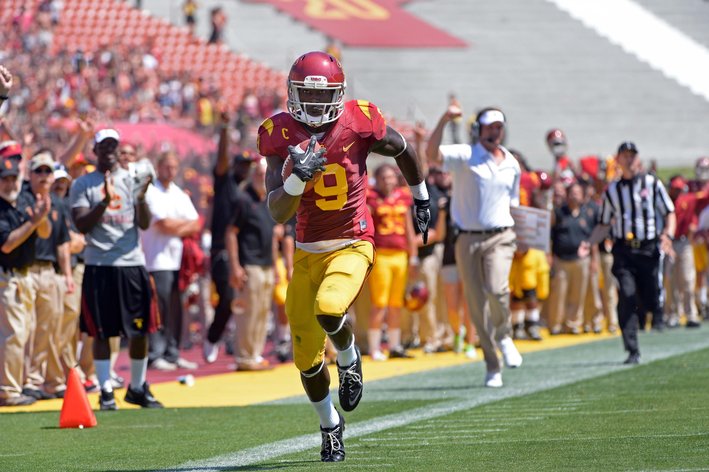 Can Utah State get program-changing win over USC?

3. The USC defense has been very good this year under new defensive coordinator Clancy Pendergast and his 5-2 defensive scheme. However, USC has struggled against spread option/read option quarterbacks, so what does Pendergast bring to the table in an attempt to slow down Chuckie Keeton?

It will be interesting to see how USC deals with Utah State's offense, and as you mentioned, Chuckie Keeton. The Trojans' defense has only allowed two touchdowns (both in garbage time), ranks second in rushing defense, ranks second in sacks and fourth in total defense. I'm not trying to underestimate Keeton or Utah State, but Utah is ranked 69th in total defense and Air Force is ranked 110th. Weber State, who the Aggies defeated 70-6 last weekend, is an FCS team. USC has not really faced a dynamic offense or quarterback like Keeton, and Keeton has yet to face a defense as stout as USC's. In any case, I wouldn't be surprised to see Kiffin run the ball a lot just to keep the Aggies' offense off the field. But for Pendergast's unit, expect to see a lot of pressure (as opponents have seen in the first three weeks) from the defensive front to force Keeton into quicker decisions than he'd normally like and different defensive packages and blitz schemes to give him different looks.

4. Has USC finally figured out that they have Marqise Lee at wide receiver, and do you expect the offense to go to him early and often since Utah State's secondary is not all that great?

The Trojans always knew they had Marqise Lee, but at times during the first two weeks, Lee was pressing too much to try and make the big-time play. If I'm Kiffin, I would utilize Lee in any way, shape or form, whether he be used as a decoy or getting him the ball in space. Maybe a play-action to start the game to get the crowd going again? Either way, the defense will likely be keying in on Lee. So they don't need to go to him consistently time and time again. Tre Madden has been a nice surprise and so has Justin Davis when he's received carries, and you still have Nelson Agholor, plus Xavier Grimble and Randal Telfer at tight end that can make plays.

5. What is the status of the USC running back situation?

Right now, it's a heavy dose of Madden and a sprinkling of Davis, plus 'Buck' Allen. Madden, who has topped more than 100 rushing yards in three straight games, is the first USC tailback to open the season with three such games since Marcus Allen in 1981. From a guy who came off torn ACL surgery, he's looked very impressive and has been the lone consistent offensive weapon thus far. Silas Redd continues to recover from offseason knee surgery, and there is no definitive timetable for his return.

6. How do you think the game will play out?

The Trojans build upon their win against Boston College, Kessler shows improvement in the passing game and the defense does just enough to slow down Keeton and the Utah State offense. USC 30, Utah State 27.