San Jose State will attempt to show what they're really made of by facing the feared Golden Gophers of Minnesota. They're a Big 10 that has gone 3-0 this season, but against teams like UNLV, New Mexico State and FCS Western Illinois. Last week they struggled for three quarters against Western Illinois before finally breaking down their defense with a strong rushing attack led by back-up quarterback Mitch Leidner.

San Jose State spent last week on the bye, hopefully fixing any errors exposed by Stanford's running attack in the new Spartan 3-4 defense. This will be the first real test against a more or less equal foe and many look to this game to see what San Jose State really looks like offensively and defensively.

Noel Grigsby out with knee injury 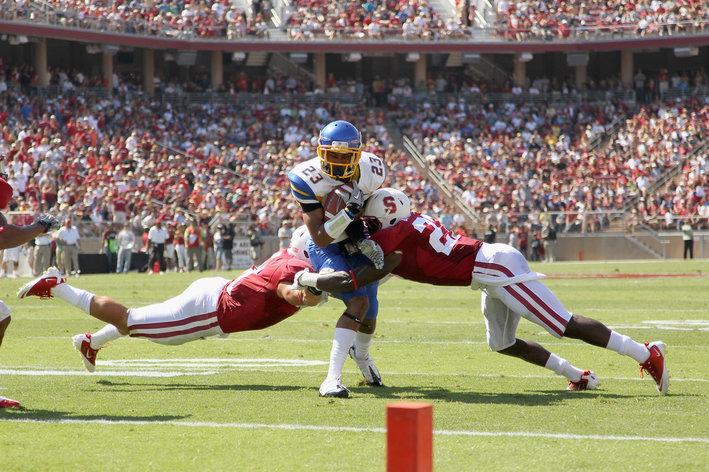 Can the SJSU offense keep moving the ball with the lose of Grigsby?

Keys To What To Watch For In The Game - (Working on this subsection title...) San Jose State Spartans:

What will the passing game look like this week? Week 1 was a bevy of deep passes, week 2 against Stanford was a lot of screen plays and quick slants. Will balance finally be found? San Jose State is also... ARRRGH... without leading receiver Noel Grigsby. Chandler Jones, Kyle Nunn and Jabari Carr will continue to be good, but look for some younger wide receiver to step and prove what they're made of now that they have the chance. That worked out well when Tyler Ervin went down and Jason Simpson took his place as starting running back. Next man up, as they say. Tim Crawley, Daniel Bradbury and Tyler Winston are all wide receivers that might see some (because they haven't played yet) or more playing time. Tyler Winston was supposed to red-shirt this season, but he has looked really good in practice ("challenging the starters" good) so he may be (brought up? De-shirted? Promoted?).

Jason Simpson by the way is going to be someone to watch this game. He had a good game against Sacramento State, then was stuffed by the Stanford front 7. Even so, he managed to get about 3.9 yards a carry against a top 5 team. Ron Caragher will probably keep the Minnesota defense honest by keeping the running game going, which means Jason Simpson will probably get a lot of chances to show what he's made of. He runs with a chip on his shoulder, as he has been sitting on the bench for 4 years. Minnesota's defense has also given up a lot of yards when running backs manage to break into the secondary.

What To Key In On When Watching For Important Things - (still... not there...) Minnesota Golden Gophers:

Last week Minnesota Golden Gophers started slow. They only managed to score 7 points against an FCS team in the first half of the game. They ground down the Western Illinois defense by throwing quarterbacks and running backs straight at them like it was going out of style. Later in the 3rd quarter the Golden Gophers broke the Western Illinois defense and piled on the points. Will the Golden Gophers keep this game plan against the San Jose Spartans? Or, will they try to open up their playbook with more passing plays to score more points early?

Will Minnesota quarterback Mitch Leidner be slinging the ball around more? He gained 105 yards through the air on a series of play-action passes, completing 7/8, so at the very least he can make easy passes. JDMill from The Daily Gopher seemed to think that the passing game is going to open up but not be the focus of the offense. Look to the Spartans to keep an eye on leading Minnesota receiver, tight end Maxx Williams, who has been the main beneficiary of play action passes.

SpartanTombo's Stated Belief In What Will Happen During This Game and The Outcome Thereof. (Seriously, I feel kinda off my writing game right now.)

Control of the clock is essential to both teams, but for different reasons. If Minnesota gets control of the clock, it will use its rushing attack to drive the San Jose State defense back on its heels. If the score is even by the half and Minnesota keeps pounding away, there's a good chance that Minnesota will score a lot more points in the 3rd and 4th quarters.

If San Jose State controls the clock, then they're going to try and put up a lot of points early to act as a cushion when their defense starts getting tired. I don't expect the San Jose State defense to collapse in the same way as some of the teams Minnesota has faced, as the strength and conditioning program over the last 4 years has really improved the Spartan's endurance. The Spartans went toe to toe for awhile with Stanford with their 3-4 defense, so I expect them to do well against the Big 10 offensive line of Minnesota.