The one positive in this game is that Hawaii was able to cover the spread.

Since this is a game I did not stay up to watch, thanks a lot Fresno State, this recap will consist of Twitter jokes from people who did watch the game, some insight from myself by concentrating very hard at the box score and laughing at USC.

The first big piece of news is that Hawaii did cover the 24-point spread by losing just 30-13, and gamblers can send their thank you cards or hate mail to Taylor Graham's 60-yard strike to Keith Kirkwood who converted the final score.

First off here are a lot of the good tweets from the game, there are more over here:

Lane Kiffin not content to let Paul Pasqualoni have the inept offense spotlight all to himself.

The way Lane Kiffin's career is going, he might only get six or seven more chances.

Reminder: USC had to steal Lane Kiffin. Like, a lot of effort went into it. And money.

Does Lane Kiffin have any other dads he can fire?

USC was all in a mess on Thursday night as their offense was so bad that they only managed to put up 23 offensive points against a Hawaii team that allowed 36 points per game last year, and against teams much lower down on the totem poll than the Trojans.

Their quarterbacks are worse than thought as Max Wittek and Cody Kessler combined to go 15 of 29 for 172 yards. Kessler did throw a touchdown pass and he also threw a pick plus he was sacked for a safety, but to spread around the blame lets give the safety credit to the lack of an offensive line.

Speaking of quarterbacks, Hawaii's new signal caller Taylor Graham -- who is a transfer from Ohio State -- did not have the opening night he was hoping for. He completed 16 of 41 pass for 208 yards, had one touchdown and four interceptions; one of which was returned for a score. Do not forget that 60 of those yards and that touchdown came with less than a minute in the game. Hawaii did miss Billy Ray Stutzmann who was out with a concussion but his absence would not have made that much of a difference.

Let's honestly give the Hawaii defense some credit as they forced two USC turnovers and held them to 3 of 14 on third downs. So there is a small bright spot for the Warriors defense.

For fun lets look at the final box score, and laugh together in unison: 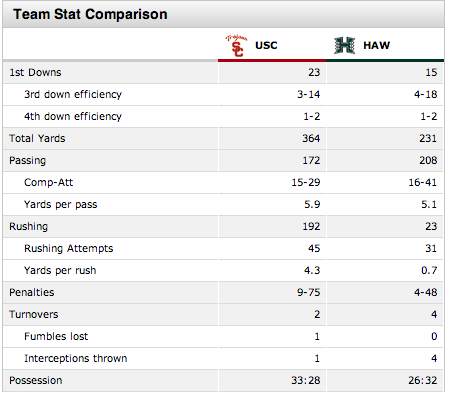