USC is still not sure who its starting quarterback will be, so the Trojans will play two quarterbacks.

Share All sharing options for: USC going with two quarterbacks against Hawaii

Either Lane Kiffin really doesn't know who his starting quarterback will be when USC takes the field Thursday night when they face Hawaii, or he is treating this game like a NFL preseason game to give both options plenty of game experience against a Hawaii team that should not be all that good.

USC has had a quarterback battle ever since Matt Barkley was injured back in the latter part of the 2012 season, and the two battling it out are Cody Kessler and Max Wittek. The consensus is that Kessler would be the starter, but he performed poorly during the most recent scrimmage with a pair of interceptions. Practice is completely closed off to the media, so no one really knows what is going on in the mind of Kiffin.

With no decision made, at least not publicly, Kiffin has placed Kessler and Wittek as co-starters. However, there is news coming out of Los Angeles that Kiffin will not even name a starting quarterback until they get to Hawaii on Tuesday evening. Both will play and Kiffin is likely using this game as a tryout to see who will perform well in a scenario that really has consequences.

Quarterback is not the only position where the Trojans have co-starters, they actually have over 10 roster spots that have two or even three players listed as co-starters. Kiffin said as much that the depth chart doesn't matter, and the only reason he does it is because he is required to create one.

For some fun here is the USC depth chart, and have fun looking at the multiple positions that are supposedly up in the air. Also, adding Twitter handles to players is a nice USC touch. 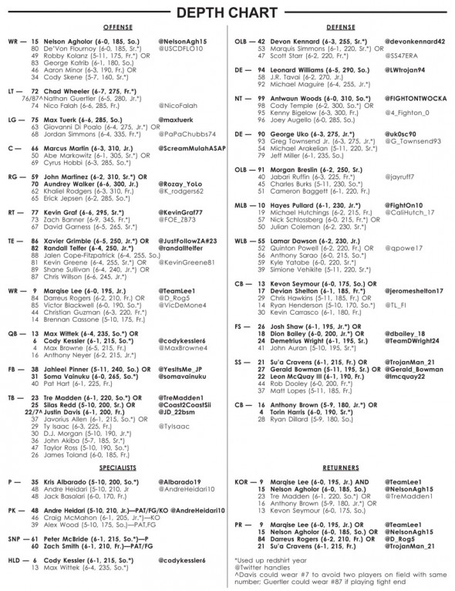 Kiffin is notorious for just screwing with the media, so this is likely another way to do so.