Chuckie Keeton has his own trading card, has Heisman hopes

Utah State is ramping up their Heisman campaign for star quarterback Chuckie Keeton.

Share All sharing options for: Chuckie Keeton has his own trading card, has Heisman hopes

There are a lot of Heisman trophy campaigns out there, even for those players who are good but have no shot of winning the award. The main goal is not based on whether or not a player gets a sniff at the prestigious award, but it is to at least create buzz for a program and one of its star players.

The Utah State athletic department has decided to pimp star quarterback Chuckie Keeton with signed trading cards, and rightfully so. He is one of the most underrated and overlooked quarterbacks in the nation, and part of that has to do with playing in the WAC, as well as for playing on a team that has very little prestige.

Had Utah State defeated either BYU or Wisconsin last year, both which were winnable games, they would have been going to the Orange Bowl and not Northern Illinois. All that buzz surrounding the equally talented Northern Illinois quarterback Jordan Lynch would have been thrusted upon Keeton, and make this campaign have some more legs in achieving the goal.

Just look at what Keeton did last year for a Utah State program that has historically been very, very bad: The Aggies went 11-2 while throwing for 3,373 yards and had 27 touchdowns, plus he is a threat on the ground by rushing for 619 yards and adding another eight touchdowns.

Playing in the tougher Mountain West should definitely open up some eyes since Keeton can be seen more easily on television, and if the junior can put up similar stats as last season he then should be recognized as one of the best quarterbacks in the country.

As for those trading cards, here they are via the Heisman Pundit: 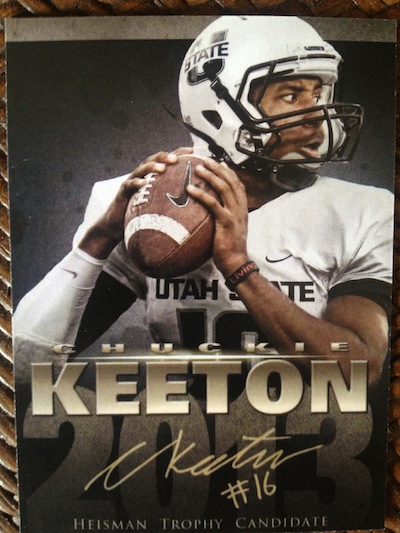 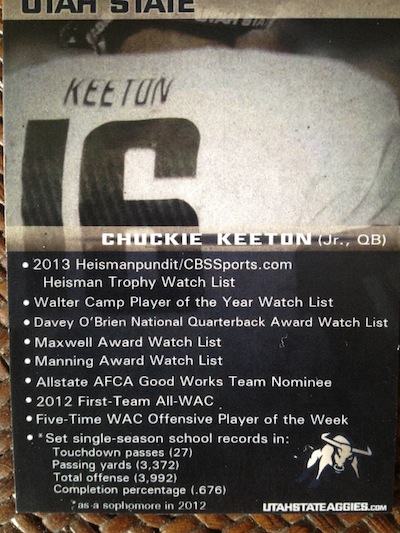 The odds of Keeton winning the award, yet along earning an invite to New York City, is going to be a long shot since he plays in a non-BCS league and on a historically bad program. Keeton will need to put up out of this world numbers and more than likely go undefeated just to earn an invite.