Nevada has plenty of options at the running back spot

Who will step up and be Nevada's next running back.

Share All sharing options for: Nevada has plenty of options at the running back spot

[Editors note: This is the first piece by our newest writer, NevadaPack, and of course will be covering Nevada]

Every spring, Nevada head football coach Chris Ault always came into spring camp looking for his "Nevada back." A Nevada back is a workhorse. Limits turnovers. Runs north and south. The last Nevada back was Stefphon Jefferson, the nation's second leading rusher in 2012 behind Arizona's Ka'reem Carey. A long line of Nevada backs predated Jefferson in Ault's pistol offense era; guys like Vai Taua, Luke Lippencott, and B.J. Mitchell.

Can Don Jackson emerge to be Nevada's next starting RB 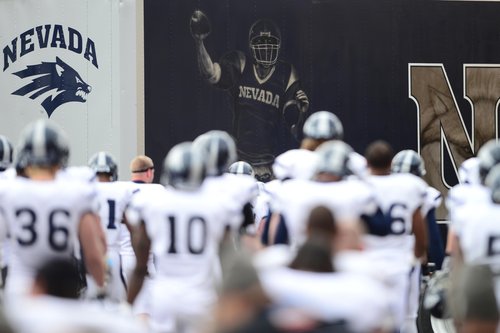 The transfer running back made an impression at spring camp

Ault and Jefferson are both gone, moving on to the NFL. Now first year head coach Brian Polian is ushering in a new era of Nevada football... with a new Nevada back. Polian retained offensive coordinator Nick Rolovich to run the pistol, so the offense will generally look the same, with one major difference: there is no clear cut favorite to take a majority of the carries from dynamic junior quarterback Cody Fajardo.

The relative inexperience in this backfield will be something new to Wolf Pack fans especially after the departure of young but talented back Anthony Knight during spring camp. Consequently, Polian is likely to incorporate a running back by committee system as he implements a pass-first offense to take advantage of Nevada's wide receiver depth. Depending upon the ability of the Pack's "Union" offensive line to execute the zone-blocking scheme, possibly leading to a struggle on the ground in the season opener at UCLA on August 31st. The real Nevada back audition will come the following week in the home opener against UC Davis.

What follows is a breakdown of four backs Polian will likely utilize in his backfield in 2013?

Don Jackson may be the most experienced back among the four, which is not saying much, considering he has zero Division I carries. Still, the transfer from Iowa Western CC looks to step in immediately and produce at a high level for the Wolf Pack. The key is whether Jackson focuses on ball security; something Coach Polian has insisted will be key in allocating the carries this year. In the Silver and Blue Spring game in limited carries Jackson gained only seven yards on five carries and a pair of receptions for 20 yards. With his experience and versatility, don't be surprised to see Jackson lined up behind Fajardo at the Rose Bowl to open the season.

The most elusive and quickest of the backs, Chris Soloman looks to take advantage of his first year of real playing time for the Pack. Soloman earned scout team's Player of the Year as a redshirt in 2012 showing his heart, determination, and talent. Soloman may be the most talented of the four backs, but he'll need to develop into a between the tackles runner. In the spring game Soloman lacked the power to burst through the defensive line, however showed his effectiveness out in space where speed was his greatest asset. Soloman carried the ball 15 times for 61 yards, good for an average of 4.06 yards per carry, which is a complete yard short of what Jefferson was able to accomplish last year.

More: Keep up to date on Nevada football Preseason MWC football coverage Oddsmakers do not like Nevada

Despite his fumble in the spring game, Soloman is capable of being a dynamic weapon both in the running and passing game. Solo may be one year away from big-time production, but look for the freshman to enter fall camp as serious competition for Jackson as the primary back. However Polian uses him, Solo will face two test against BCS contenders UCLA and Florida State before September ends.

Although officially listed as a receiver, Brock as been getting a majority of his snaps as a running back, where is speed and quickness will serve the Pack in third and long situations to shore up depth at a weak position. Lining Brock up as a running back will be a better use of his talents instead of burying him in a crowded receiving core behind sixth year senior Brandon Wimberley, and juniors Richy Turner and Aaron Bradley. His lack of size and strength will limit his ability to be an every down back, but with Polian and Rolo drawing up specific patterns for the junior to take the ball outside the hashmarks, Turner stands to be the x-factor in the backfield. His spring game stats (eight carries for 55 yards, a single reception for seven yards) are encouraging, as that's almost seven yards per touch.

What missing from this group so far? A punishing big body to bring in for short yardage situations. That is exactly what Stephens can be this year for the Pack. His tree trunk arms give him the strength to protect the ball in short yardage situations, something that was a major issue with Nevada and especially Jefferson in 2012. Stephens scored the only touchdown among the running backs in the spring game on a one-yard run that showed his power and potential. His 58 yards on 15 carries (nearly 4 yards per carry) are consistent with what should be expected for a goal line and third and fourth and short back.

This committee will not put up numbers close to what Jefferson did last year; they will have to settle for attempting to replace him in the aggregate. In 2013, we're not likely to see a Nevada back.
But we may see some Nevada backs.

Keegan Bosier is currently enrolled at the University of Nevada. He has lived in Nevada since he was seven years old, and followed Nevada sports ever since. You will see him in the front row of all the football and basketball games cheering for his Pack.