OH HEY, THERE'S NEWS OF NEW FRESNO STATE BLACK UNIFORMS! Let's hold a contest to see who can give their team the best new uniform mockup!

Author's Note: I'm 100% confident the new Fresno State uniform won't look like this. It's a slow offseason, and uniforms are fun to look at and create.

As mentioned in the links this morning, the Fresno Bee reported of uniform changes (though there haven't been pictures yet and the article came out May 30th), specifically of a blackout. They also mentioned "whiteout" and a "retro helmet," however the blackout was the big news as they will be worn one time, and then probably auctioned off for charity.

That game versus Nevada on Nov. 2 is a long time from now, so how about we create our own Fresno State blackout? 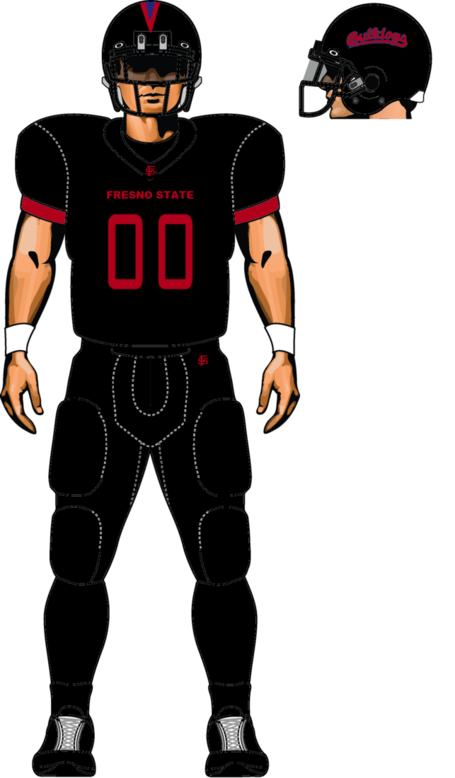 So what's the first thing noticeable about this mock-up, other than the fact that it's a poor MSPaint rendering? The actual bulldog is nowhere to be seen. That's right folks, unless you have a completely awesome apocalyptic looking animal on your helmet (a.k.a. Broncos), it does not belong on a blackout uniform.

Instead, I used the retro "Bulldogs" script as I felt the simplistic script complimented the elements of an all-black uniform. The other thing that is noticeably different is that I used the alternate "FS" as the shield and pant. Fresno State baseball has one of the coolest hats around, and that emblem is associated with the school, and they have won a national championship. Why not bring that same winning mentality to the football team?

With this uniform, Fresno State will now join Boise State, Hawaii and Air Force, in what Uni-Watch dis-affectionately calls "Black For Black's Sake." Which school will be next to follow the fad? I'm placing bets on Nevada...

We want to see YOUR creative skills, readers! Here's the contest:

1. Design a uniform for either your team (or some other Mountain West team).

2. Post the pictures in the comments of this article, our give us a mention on Twitter so we see it, our Facebook Page and also if you so inclined drop a uni to use on our Google+ page (Yes we have one of those pages).

3. Multiple submissions ARE allowed but it must be a different team for every single submission (no three Boise State or 15 Utah State uniforms).

4. This is a MOUNTAIN WEST SITE! Therefore all submissions must be a current Mountain West team. Sorry UTEP.

Can other authors submit?

Yes, as far as I know, this contest is being put on by Jeremy and I. So writers, y'all can enter as well.

When does the contest end?

You're just whoring for page views!

That's not a question and yes, I am. But if your uniform is the best you can get a t-shirt out of it, so shut up. (Obligatory plug to our store full of shirts)

I'm not a commenter on the site, can I still submit?

Yep, that's why we have the Facebook and Twitter. If you have neither one of those, email me at: cjhondros at gmail dot com or Jeremy at: mountainwestfootball at gmail dot com.

I don't like any of the styles of shirt in the store, isn't there anything else I can win?

Not right now, though we're consistently trying to think of new ideas for shirts.