Over the next few weeks, we will take a look at Nevada's non-conference opponents in the 2013 football season. We start with UCLA, who Nevada opens up the season against Aug. 31 at the Rose Bowl.

The Nevada Wolf Pack open up their first non-conference game when they face the UCLA Bruins at the Rose Bowl. The game kicks at 10 p.m. ET and will be seen on the Pac-12 Network.

Here is a first look at UCLA.

2012 season in review: An impressive start to the season highlighted with a win at home over Nebraska, gave Bruin fans a lot to look forward to in coach Mora's first year on the job. With 1,700-yard rusher Jonathan Franklin and young dual-threat quarterback Brett Hundley (3,745 yards passing, 355 rushing) in the backfield, the offense, when not limited by sacks, was lethal in flashes. 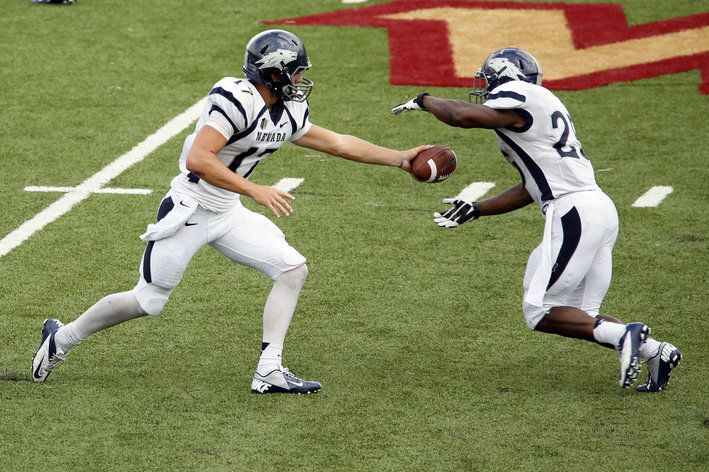 Stay up to date on all the preseason info on the upcoming MWC football season.

The defense though was impressive in getting to the quarterback, ranking fourth in the nation with 46 sacks. Despite the defensive struggles UCLA managed to win the Pac-12 south and earn a spot in the Pac-12 title game, which they eventually lost to Stanford.

The year for the Bruins ended in disappointment with three straight loses.

2013 Strengths: If Brett Hundley can avoid a sophomore slump, he has the ability to become one of the best quarterbacks in the Pac-12. He has the ability to get yards both in the air to primary receiver Shaq Evans, and using his own feet. This should be a position that UCLA has an advantage or at least a push during most of their games this year.

On defense the Bruins have one of the most feared defensive lines in the nation full of pass rushers. Returning five of their front seven should strike fear in an offensive line. This bunch is led by a former running back, Anthony Barr, who has exceptional quickness for his position allowing him to get past slower offensive linemen and get to the opposing quarterback. If this defensive is to be successful it will come down to their ability to remain as productive as they were in 2012.

2013 Weaknesses: The offensive line protecting Hundley was extremely young in 2012 so having four returning starters this coming year should be a huge boost. But as a group they are still young and could struggle against teams with productive pass rushers on the edge.

After losing star running back Johnathan Franklin, there are some question marks in the backfield. Jordan James and Damien Thigpen look to carry the load next year for the Bruins, but they are relatively unproven. Finally the secondary last year ranked 91st in the nation and loses two starting cornerbacks. For UCLA to have a successful year in the competitive Pac-12, the secondary must improve with its new pieces at cornerback.

For even more on UCLA check out Bruins Nation.