Here is an early look at the draft stock of Fresno State quarterback Derek Carr,

Fresno State quarterback Derek Carr has the tools to be taked in the upcoming 2014 NFL Draft, and is considered by some to be a top-10 quarterback on the board. It is still extremely early in the process as there is still the issue of the 2013 college football season. 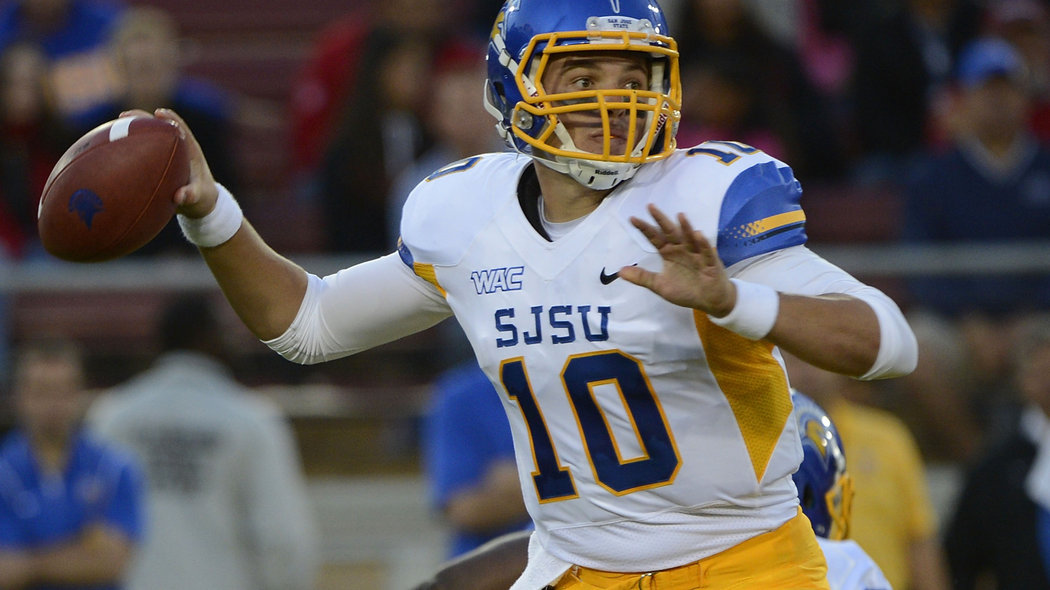 Keep up to date with MWC prospects.

Carr had a very good 2012 Mountain West season where he completed 67.7 per cent of, 4,104 passing yards, 37 touchdowns and only seven interceptions. He also has ideal quarterback size at 6'foot-3, but he does need to add some bulk to his 205-pound frame.

Carr also needs to be more aware of where the pressure is, and that might be his biggest weakness.

Mocking the Draft put together a more complete profile, and here is their first evaluation of Carr:

Carr is an impressive arm talent with the size and athleticism to be a successful NFL quarterback. The concerns with Carr are all between the ears. He needs to learn how to progress through his reads and keep his eyes downfield in the face of pressure. Given the mechanical breakdowns that occur when he's faced with pressure, Carr won't have a bright NFL future unless he improves that area of his game. In fact, if he continues with those habits, his career could continue to resemble that of his brother, which isn't the ideal path for a quarterback.

Going the same way as his brother David would be dissastiroius since he was sacked as much as any quarterback, pretty much ever in the NFL. There will be plenty of chances for Carr to improve on that this year, and if he can get better at multi-tasking in the pocket then he could be taken within the first three rounds.

Walter Football also put out their own early evaluation on Carr this week:

Carr is an improving quarterback who was a 2011 Second-Team All-WAC selection as a redshirt sophomore. The first-year starter completed 63 percent of his passes for 3,544 yards with 26 touchdowns and nine interceptions. He ran for three scores too.

Carr was even better as a junior, completing 67 percent of his passes for 4,104 yards with 37 touchdowns and seven interceptions. He beat up on some weak competition and didn't have his best games against Oregon or Boise State.

Carr has a strong arm and good mechanics, and assuming he improves during his senior season he could possibly push himself up into the top half of the 2014 NFL Draft.