Jerry Tarkanian to get statue on UNLV campus

The 82-year-old former UNLV head basketball Jerry Tarkanian is getting a bronze statue on campus.

Share All sharing options for: Jerry Tarkanian to get statue on UNLV campus

Former UNLV head basketball coach Jerry Tarkanian was finally inducted to the Naismith Memorial Basketball Hall of Fame, something that has been long over. Now, "Shark the Tark" is getting a brozne statue built on UNLV's campus, per the Las Vegas Sun:

The bronze statue, which is expected to be finished by July and unveiled outside of the Thomas & Mack Center shortly thereafter, will be approximately life size with Tarkanian sitting down in a folding chair, wearing his traditional short-sleeved shirt and tie. He's holding the towel to his mouth in his right hand.

Pretty much about time, but UNLV could have been waiting for Tarkanian to be included in the hall of fame. The school is also setting up a scholaship fund with Tark's name attached.

This statue is life sized is a great tribute to the hall of fame coach, mainly because it includes his trademark of chewing on a wet towel instead of having to make repeat trips to the water cooler. 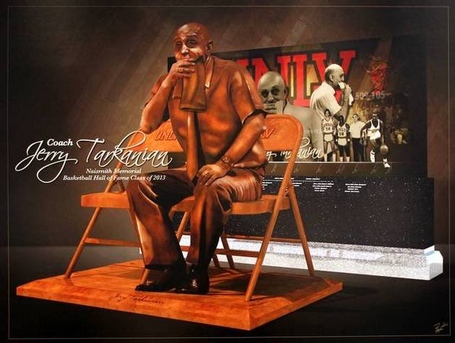 Have a seat and take a picture with the coach.