Utah State defensive back Will Davis was taken in the third round of the NFL Draft.

Defensive backs and tight ends have been who the NFL has been plucking from Mountain West -- or future Mountain West in this case -- in the 2013 NFL Draft. The latest player to be taken was Utah State Aggies defensive back Will Davis who was selected No. 93 overall to the Miami Dolphins.

This is a bit high for Davis who was ranked as the 124th prospect from Mocking the Draft, but he definitely fills a need for the Dolphins. This is the second Mountain West player that the Dolphins drafted on Friday night, the other was Boise State's Jamar Taylor. 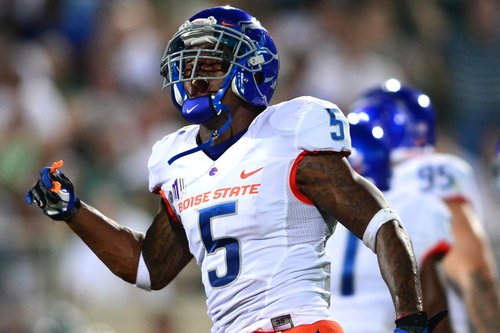 As for Davis, he started football late by playing just one year of high school ball, and that is likely why he landed at a smaller school like Utah State, not until after transferring from two other smaller schools. There was a lot of promise in his one year where he snagged seven picks as a senior. He also starred on the track and basketball team, so in short he is an athlete.

The one school where Davis played prior to Utah State was De Anza College. There he earned first-team all-Golden Gate Conference and first-team all-state honors after snagging eight interceptions, returning two of those for touchdowns.

At Utah State Davis keep his upward trajectory where he eventually became an all-WAC player in 2012. In his senior year he recorded64 tackles, 4.5 for loss, 17 pass breakups, and five interceptions with one returned for a touchdown.

More: The Phinsider has more on Will Davis MWC coverage of NFL Draft

His athleticism from being a multi-sport star in high school shows as he is very good at changing directions, as well as with lateral movement. Davis also gets his hands into the receivers as well as the ball to disrupt a potential catch.

The Dolphins are in need of a slew of defensive backs and Davis stands a very good chance of contributing early, and competing with Taylor for playing time as a rookie.