The NCAA in itself has some pretty bizarre rules, and they came out with a list of proposed rule changes going forward.

The NCAA rolled out some proposed rule changes on Wednesday. The big rule change is the effect of targeting which would be a 15-yard penalty and automatic ejection, previously the penalty was just a 15 yard infraction.

While that will get all the attention, there is another rule that some Boise State fans will absolutely hate, which has to do with uniform combinations. When Boise State first entered the Mountain West they were barred from wearing blue-on-blue uniforms for conference games. When Boise State decided to remain in the league that rule was abolished.

However, here comes in the NCAA to make an unnecessary proposed rule change regarding uniforms:

To require teams to have either their jersey or pants contrast in color to the playing field.

This means no more all-blue uniforms at home, as well as all-green uniforms for Colorado State, Hawai'i and a handful of other universities. Also, no more all-red at the inferno for Eastern Washington home games.

The rule is just stupid and as one person put it, a better uniform rule change would require to have numbers on the sleeves and also easier to see numbers on the jersey themselves.

This rule is about as dumb as the bagel rule that just was overturned to allow cream cheese for when recruits come to visit. Not sure how same color uniforms affect the play, maybe the officials have a hard time seeing the numbers. However, that could be rectified with a more visible number.

These proposed rules will be reviewed on March 6.

Whatever, the NCAA just hates Boise State, and here is a look at the blue on blue uniforms, possibly for the last time: 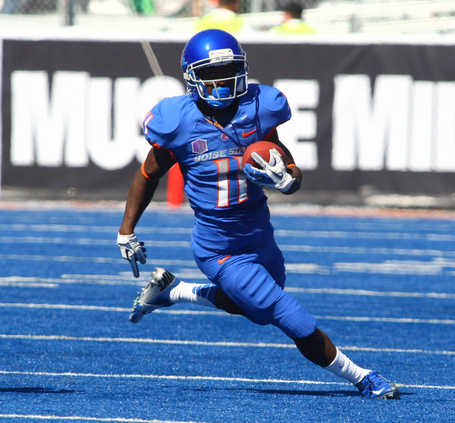