Vizzini remembered two of the classic blunders: "Never get involved in a land war in Asia" and "Never go against a Sicilian when death is on the line." He actually forgot a third: "Never use Conference Expansion like a Risk Board." Chris Hondros forgot the third as well...

Editor's Note: Inspiration for this article came from this fanpost. 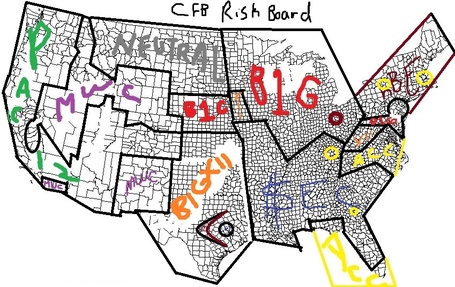 I'm sure most of you have played Risk before, and if you haven't there are many ways to win, but they almost always involve a combination of tactics, strategy and dominance. Conference expansion is the exact same way, except we're not using armies. What you see above is the current Risk Board of College football with seven factions.

Here are some possible outcomes of future conference expansions: 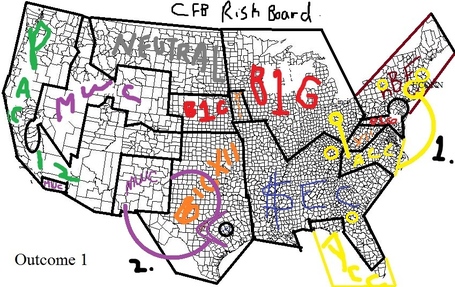 This is easily the most likely outcome of the future. The ACC answering to the pleas of Connecticut and Cincinnati, will poach them from the Big East, as a result Houston and SMU will ask for assistance as well and the Mountain West will provide them shelter, by replanting their foot in Texas. The Big East is essentially left for dead with the stray schools crumbling into mediocrity. 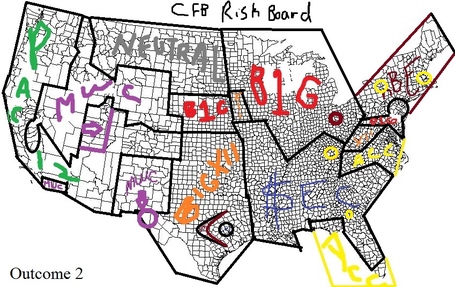 Outcome 2: MWC moves to 14 without aggravating the system

This is also a very easy outcome to predict because the other six conferences won't care. The MWC coaxes BYU to rejoin, and with them comes UTEP. This move would be smiled upon by geography majors everywhere as it is still Mountain and West. 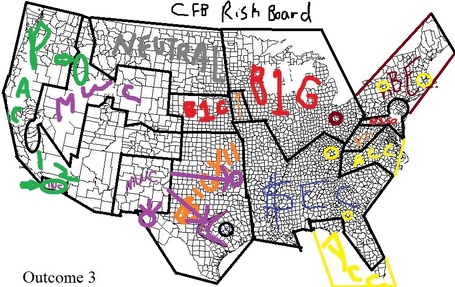 This is the ultimate dream come true for Boise State and San Diego State fans. With the Pac-12 calling, the Broncos and Aztecs abandon ship leaving the MWC searching options. These options would be bringing UTEP, Tulsa (both currently in Conference USA), Houston and SMU (Big East). Since the Big 12 might not like the invasion of television territory, a non-conference alliance could be formed where both could benefit. 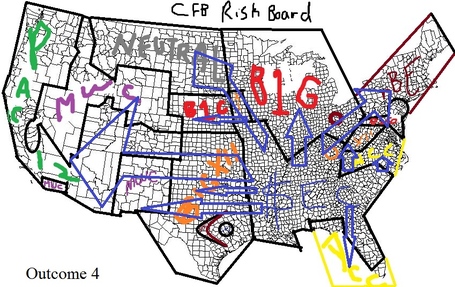 You know that one player you hate to play Risk with? The one who's always overly eager to play, makes those perfect diplomatic moves and truces, while he builds up his armies in the Urals. Next thing you know you have 120+ armies right in front of you and there's no way to stop them. Not to mention that the player is a complete dick about it..."Hey, I'll offer you a 10 turn truce if you attack him for me in return. It's not like you're going to win anyway, but it'll be a nice battle for second." 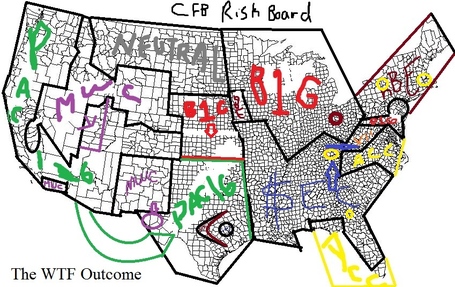 The Pac-12 makes a deal with the devil for Texas, Texas Tech, Oklahoma and Oklahoma State. The Big Ten as a result, goes after Kansas and Kansas State (KU is an AAU) and probably will leave Iowa State out in the dust, despite them also being AAU. The SEC will take Louisville and West Virginia, just because, leaving the MWC to make some big decisions. Here, the MWC can become a refuge for Baylor and TCU, or they can go with their "we want BYU back" plan. There is no logic to this decision...it's just chaos.

Do you like playing College Football Risk? Here's the link for you to download the basic setup. Use your favorite paint program to make your moves. Post it in the comments or email it to me (email's in my profile) with your username and I'll post it up for you.

The NCAA is at your disposal!