Boise State is looking for a new head coach

With Chris Petersen’s imminent departure from Boise State now official, its time to speculate on his replacement.

Share All sharing options for: Boise State is looking for a new head coach

Chris Petersen’s imminent departure for Washington signals a hunt for Boise State’s next head coach. With Petersen’s annual interviews and constantly being at risk to leave, Boise State AD Mark Coyle should already have a short list of possible candidates ready for Plan B. Bronco Nation can only hope he will pick as wisely as former AD Gene Bleymaier did when he was the athletic director at Boise State.

With the departure of Washington head coach Steve Sarkisian to USC, one name that could be available is current Washington defensive coordinator Justin Wilcox. He has been coaching college football since 2001 and has a long history with Boise State. Wilcox actually began his coaching career at Boise State, first as a graduate assistant in 2001 for head coach Dan Hawkins. 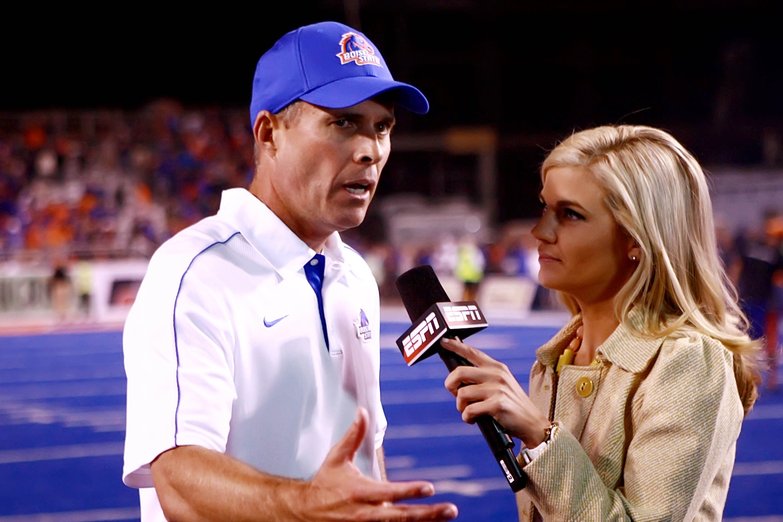 What is next for Boise State?

He later returned in 2006 as the Broncos’ defensive coordinator when Petersen took over the program. In his four years as the DC, the Broncos lost only four games and Wilcox left with an impressive 49-4 record. His defenses were among the highest-ranked defenses in the nation. The question is, could the Broncos bring him back home as their new head coach, or would he prefer to stay on as an OC with either Sarkisian or Petersen?

Another name that has been tossed around in Bronco Nation circles is former Boise State offensive coordinator Brian Harsin. He spent 10 seasons at Boise, five of which were as the OC and quarterbacks coach. During his stay Boise State posted a 61-5 record including two undefeated seasons and two Fiesta Bowl victories over Oklahoma in 2007 and TCU in 2010. Harsin was lured away to accept an OC gig at Texas (2011-2012) before being hired last December as the head coach at Arkansas State where he has posted a 7-4 record this year. The possibility that he could be in play might be compounded by his current contract obligations.

There is also some talk that the position could be offered in-house. Certainly defensive coordinator Pete Kwiatkowski will attract immediate interest. "Coach K" as he is known here, is entering his fourth season as the Boise State's defensive coordinator, and was the defensive line coach prior to 2010. Kwiatkowski has been with Boise State 16 years as a member of the coaching staff, and his eighth since returning to join Chris Petersen’s staff in 2006.

Jeremy Mauss mentioned to me this morning that he thinks that while Kwiatkowski could be a consideration, another Dark Horse could be Brent Pease. On that I agree. He was the former wide receivers and offensive coordinator at Boise State from 2006-2011, before leaving to accept the OC job at Florida. He was just fired by the Florida Gators football team after that team went south offensively over the past two years in what many say was not entirely his fault. Pease is immediately available to take over the Broncos reins, and was very successful in Boise. He would bring an extensive coaching experience from other OC gigs at Northern Arizona, Kentucky and Baylor. If he was hired by the Broncos, it would be his first job as a head coach.

Petersen’s departure also paves the way for a return by former head coach Dan Hawkins, who left the program in 2006 for Colorado where he accrued a dismal record before being fired in 2010. He was fired again this year after a short stay in the CFL at Montreal. He is available and lives in the Boise area, but he would be a long shot to get a return engagement with the Broncos.

Whoever the candidates are under consideration as Boise State's next head coach, the Broncos are expected to move quickly in naming Petersen's replacement. His sudden departure leaves a huge void and a need to ease the coaching transition for the sake of stability. There is an immediate need to erase any uncertainty about the future of the Boise State football program with both recruiting and the bowl season just getting underway.