Boise State will meet Oregon State in the Hawaii Bowl as a season finale for both teams. This last game for 2013 will mark the 8th meeting between the Broncos and Beavers in what has become a friendly Northwest rivilary. This is the second time Boise State (8-4) has been invited to play in the Hawaii Bowl. But it couldn’t come at a worse time and marks the first time since 2006 the Broncos will be without head coach Chris Petersen at the helm. Instead, the post-season game will be coached by linebackers and interim head coach Bob Gregory. The Beavers are coming into the arena with a 6-6 record this year under head coach Mike Riley, a 13-year veteran at Oregon State. It's their first trip to the Hawaii Bowl.

What to expect when Oregon State has the ball: Boise State has dropped five games this year, and much of it is due to the Broncos defense. They have employed a strategy that gives up large chunks of open-field yardage, opting instead to try and slug it out inside the red zone. Oregon State will want to take advantage of that against a Boise State team that is ranked 75th nationally in total defense and giving up an average of 410 yards per game. More importantly, over 284 of those lost yards were to the pass.

Looking down Boise State's throat will be Oregon State QB Sean Mannion, 6-4, 220 lbs. He is the 2nd ranked QB in the nation in passing and his numbers are astounding: he has completed 66% of his passes and accumulated a whopping 4403 passing yards and 36 TD’s this season. That puts Oregon State 3rd nationally in passing offense. WR Brandin Cooks, 5-10, 186 lbs, has caught 120 of his passes for 1670 yards and 15 TD’s. The combination of Mannion and Cooks gives the Beavers a one-two punch against the Broncos' secondary.

The flip side of the coin features the Beaver running game---or lack thereof. It’s hard to say LOUSY without being offensive, but they are ranked near the bottom of all FBS teams with an average of just 86 rushing yards per game. Boise State’s defense, anchored by All-America DE Demarcus Lawrence, 6-3, 244 lbs, and OL Charles Leno, 6-4, 294 lbs, will be sure to force Oregon State's football into the air.

What to expect when Boise State has the ball: Interim head coach Bob Gregory announced Friday that QB Joe Southwick, 6-1, 202 lbs, has been sent home for a rule violation so duties at quarterback will once again rest on the shoulders of QB Grant Hedrick, 6-0, 200 lbs. Hedrick carried the Broncos from midseason to the finish line after Southwick was sidelined with a broken ankle. Originally, both quarterbacks were slated to play so it might take some weight off the offense who can now concentrate on a single package with Hedrick. The loss of Southwick is serious but not necessarily fatal. Hedrick has completed 68.2% of his passes and tossed 15 TD's with only 5 interceptions in 198 attempts. His downside is that he is 3-2 in games as the starter and struggled at times with Boise State's version of the up-tempo, quick-strike offense.

If Hedrick plays smart football, Oregon State will be vulnerable. Their defense is ranked #95 in the nation and gave up an average of 428 yards per game during the season. Those yards were lost about equally on the ground and through the air. The Boise State coaches will surely try to exploit both areas. Hedrick's passes will seek out WR’s Matt Miller, 6-3, 218 lbs, and maybe Shane Williams-Rhodes, 5-6, 158 lbs, who are his favorite aerial targets. Williams-Rhodes, however, is still recovering from ankle surgery and is a game-time decision to play. Miller on the other hand, will be giving it his all as he only needs 66 more yards to go over 1,000 for the year. RB Jay Ajayi, 6-0, 215 lbs, will be Hedrick's main carrier out of the backfield and you can expect Ajayi to have a good day squeezing through the Beaver D-line. He is second in the MW with the most yards (1,328 rushing yards averaging 5.9 yards per carry), and second in the conference in rushing touchdowns (17).

The game should be close between Oregon State’s expected aerial attack and Boise State’s more balanced approach. Many odds-makers are giving Oregon State a 3-point win, apparently because of the coaching situation at Boise State. But that might be premature: Gregory has something to prove if he wants a spot on new head coach Bryan Harsin’s staff, and, second, rather than being overly demoralized by Petersen's departare, at least one source is noting that the Boise State players are pumped up over Harsin and his new coaching hires.

The game in The Islands should be great fun for a team like Boise State that has been through so much this season. The Boise fans just hope that after all the drama, the luau, the beach barbecue, and the trip to the Diamond Head Classic to support the Broncos basketball team, the football team won’t be too lethargic from stuffing themselves with roast pig and poi to pull out the win. 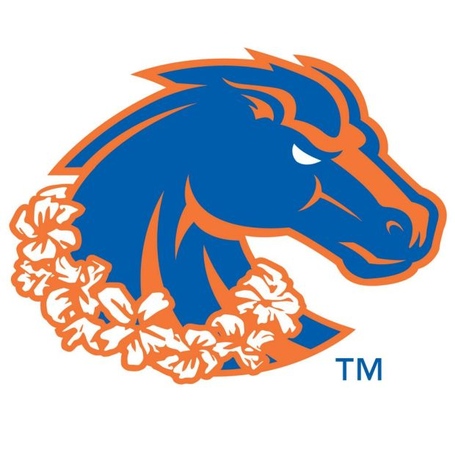