In the most non-shocking news ever, Chris Petersen is no longer wants to be considered for the vacant USC job.

Boise St. Broncos head coach Chris Petersen has taken his name out of the running for the open USC job. If this news is shocking to anyone then give me an email and I can hook you up with this guy in Nigeria who has a large sum of money for you.

Mutual interest? That is a nice way of putting it that Peteresen has no interest in the Trojans job opening.

Each and every offseason Petersen is considered for a high paying jump at a major conference, but each and every year he declines the overture and very rarely even gets to the interview stage at these openings. Two years ago he turned down $4 million to coach UCLA, and there were reports that USC would pay their next head coach upwards of $6 million.

Who knows what Petersen was offered but he gets a little bit over of $2 million per year in Boise State, and that goes a long way. Petersen just seems content to rack up the wins at Boise State and in most years be the most dominant team outside of the major conferences.

Thanks to @CelebrityHotTub and Spencer Hall we now know that Boise State has a generic form letter for the pencil pushers to fill out when Petersen politely declines an open job at a major college program. 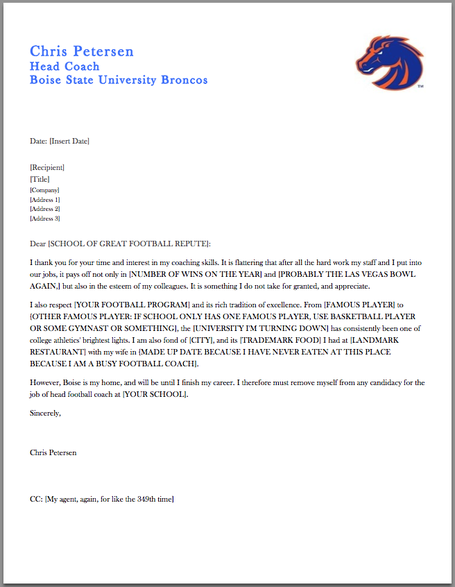