Despite a 7-6 season, the 28th ranked scoring offense in the country, an average game day temperature of 60 degrees, and a chance at the program's first bowl game in 5 years, Colorado State's football attendance still shrank to a 42-year low. So what happened?

Before reading this article, it is important to understand that attendance is an issue across the country, and it is not just unique to college football. The NCAA, NFL, and other major sports are all struggling to keep fans in seats with the advent of in home technology. Entertainment systems have become more advanced providing fans a more comfortable and less expensive option for viewing their teams. But this is not the reason Colorado State has struggled to get fans to Hughes Stadium.

If you look at the ticket sales for 2013, they actually increased. CSU sold more season and single game tickets than last season, but could not connect to the student body. Colorado State allocates 10,000 tickets a game just for student use. These tickets are free of charge, but are paid for by a small fee for athletics out of each student's tuition and fees. Colorado State did not release numbers for student attendance, but from first hand experience I would guess on average it was no more than 3,500.

So why did the record breaking offense led by Kapri Bibbs and Garret Grayson combined with favorable weather conditions not translate to more students? The answer is a combination of a couple main factors.

The phrase many fans bring up is, "Just win." It is true that winning can cure some of the ailments of college football, and Colorado State had seven wins this season; but they won at the wrong times. Two of the highest attended student games this season were the rivalry game against the University of Colorado and homecoming against San Jose State. 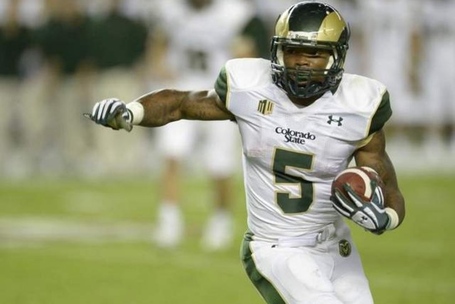 The Rocky Mountain Showdown is not technically a home game, but it is the most important game on most student's schedule. This season's edition should have been a Ram victory. CSU was returning most of a 4-8 team while Colorado was coming off a one win season and the firing of their head coach. Students bought up all of the tickets allocated to them and filled up Sports Authority Field early to cheer on the Rams. Unfortunately, Colorado State not only lost, but looked ugly in doing so.

For an average student on a four year graduation track, they have seen a total of 10 football victories in their time in Fort Collins. It is tough for any fan to sit through that type of poor play, but even more so for college students who have more distractions than their attention spans can bear. When CSU lost the opening game of the season against Colorado, it looked like more of the same for the Rams this season. This heightened the sense of apathy even higher than it already was.

But the Rams had a chance to draw them back with a Homecoming matchup against San Jose State. Similar to Colorado, SJSU had lost their coach from the previous season and was struggling coming into the game. Colorado State had just scored 58 points against UTEP following a good showing at Alabama. With Colorado State also having their bye week going into the game and San Jose State playing in Hawaii the week before, all signs pointed to the Rams picking up their third win of the season. And again, in similar fashion to the Colorado game, the Rams found a way to beat themselves in front of 26,000 fans. After that game, the student seats would remain mostly empty.

There are other factors influencing the low student turnout. Hughes Stadium is not very fan friendly, especially for college students who need to access Instagram, Twitter, and social media constantly. Hughes Stadium's location and structure creates a black hole for cell phone reception. The bones of the stadium were constructed with concrete that makes it almost impossible to get cell service inside the stadium and difficult in the parking lot. This may seem like a minor gripe, but it is a large reason fans stay at home to watch the game. This is a problem seen by NFL teams as well. Both the 49ers and Falcons are spending $10's of millions to integrate high speed WiFi into their new stadiums so fans can keep tabs on their social life, sports, and whatever else they need outside of the game.

The concourses on the student side of the stadium are not very inviting. There is nothing that identifies the area with Colorado State and the facilities have been mostly unchanged since Hughes' beginning in 1968. The lack of overhead protection leaves it vulnerable to the elements with the bathrooms the only place to try to warm up, which are not the most comfortable of places. All of these elements combine to make Colorado State football games very unappealing for students, especially when the team playing has only won 13 wins in the previous four seasons.

When you combine the unfortunate timing of the losses with the inability to make football games an 'event,' it created a perfect storm to shun students from making the trek to Hughes Stadium this season. With the Rams traveling to New Mexico to play in their first bowl game since 2008, buzz amongst the student population has increased. Hopefully with a victory, the Rams' four year skid attendance skid will begin to reverse and mirror the increase in product on the field.