Nevada gives up four second half touchdowns to BYU, and drop season finale.

Share All sharing options for: Nevada vs. BYU final score: Cougars have big second half to top Wolf Pack, 28-23

This was a game of two halves between Nevada and BYU, and at the half the Wolf Pack led 7-0. The Nevada defense was smothering the BYU receivers and getting pressure on Taysom Hill for the entire first half. This was a shocking element since the Nevada secondary has been just awful this year.

BYU's offense helped keep Nevada in the game by going away from the running game despite starter Jamaal Williams having 40 yards on just three first half carries. The vaunted BYU defense was not getting much done against Nevada but were doing just enough to not allow the Wolf Pack to put up points.

Then the second half happened. BYU made adjustments on both side of the ball and their offense and defense started to click. The Cougars scored four touchdowns on their first four possessions of the second half -- their final possession was to just run out the clock.

The running game came into full effect for BYU and Nevada had no answer for the ground attack. Williams had a career high with 219 yards and averaged an amazing 14.6 yards per carry with a touchdown. Hill chipped in with 154 yards on the ground including the game-clinching win on a 35-yard scamper.

Nevada's offense was able to keep pace with BYU until they had to settle for a chip shot field goal in the fourth quarter. That 24-yard field goal was the defining moment of the game, because Nevada had a first-and-goal at the 3-yard line. Nevada ran the ball on first and second downs but both were a loss for a yard each, and on third down the pass was incomplete.

BYU took advantage of just the field goal make for the Wolf Pack and that next drive is when Hill scored on that 35-yard run.

Nevada had a chance in this game when trailing 28-17 they drove down the field and scored a touchdown, but missed the two-point conversion which would have made it a three-point game. On that drive Nevada was helped by the officiating with a somewhat questionable pass interference call as both players were bumping down the sideline, but the BYU defender pulled the Nevada receivers arm.

However, the big play that bailed out Nevada was on a play were there was a Cody Fajardo interception, and a Wolf Pack penalty. Then BYU's Kyle Van Noy was called for roughing the passer along the sideline, so that penalty kept the drive alive for Nevada. There were plenty of BYU fans who felt that penalty was in favor of Nevada since the officials were from the Mountain West. The call was questionable on Van Noy but it seemed to be the right call as he took more than a few steps to hit Fajardo.

The onside kick was an odd high kick about 25 or so yards down the field and BYU recovered, and then BYU just ran the ball to run out the clock.

Nevada looked inspired in this game during the first half, and in the second half they were unable to stop the BYU running game and that was the key. The secondary had an excellent game by holding Hill to a season-low 98 yards in the air.

Here are the stats, and if Nevada had a better rushing game they could have won this game. 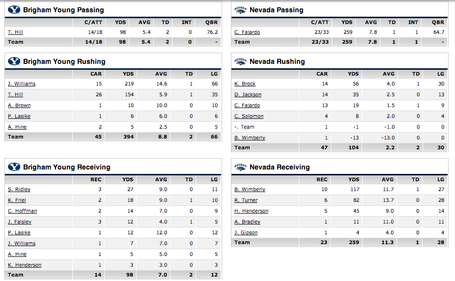