San Diego State vs. Marquette basketball: Getting to know the Golden Eagles

Share All sharing options for: San Diego State vs. Marquette basketball: Getting to know the Golden Eagles

San Diego State faces Marquette Sunday evening (9:30 p.m. EST, ESPN2) in the championship game of the Wooden Legacy. To learn more about Marquette basketball, we posed a few questions to SB Nation's Anonymous Eagle to get their thoughts before the big game.

1. What is your take on senior Jamil Wilson? Will he be the go-to guy this season?

Ah, Jamil (and we're going to go on a first name basis here, because we've got two other Wilsons on the roster); wonderful, infuriating, prodigiously talented, maddeningly confounding Jamil. Here's the rub: Jamil Wilson is more physically talented than roughly 95% of the cats who play Division I college basketball: great size, absurd wingspan, good looking jumper, impressive handle for a kid his size, good rebounder, solid defender. And yet: for all those dazzling skills, there are a curious number of games when he'll finish with a 7-point, 7-rebound line in 25 minutes and you're left looking at the box score wondering: "Wait, why did he only take six shots all game?" Part of that can be attributed to Jamil's penchant for picking up cheap fouls -- he had 3 in the first half vs. Ohio State, fouled out against Arizona State, and had four fouls in 25 minutes against George Washington -- but, really, he's capable of putting up 15 and 8 in his sleep. Which makes a 5 point, 7 board performance against GWU hard to stomach following his jaw-dropping 24-and-9 against Fullerton two days earlier.

2. Davante Gardner is having a great tournament coming off the bench. What can we expect on Sunday?

Ox will come off the bench again, because...well, because he always comes off the bench and provides instant offense. We've said it too many times to count, but Ox was put on this earth to do two things: crush Skittles and score buckets. And while the first part of that equation is going to limit his minutes to 20 or 25 (a fact that was driven home when Gardner had to play 30+ minutes against ASU and looked like a goldfish that had been scooped from its tank and dropped on the carpet), the second part means he's good for at least 14 points on a nightly basis, all while never getting more than 3 inches off the floor. He's a delight. 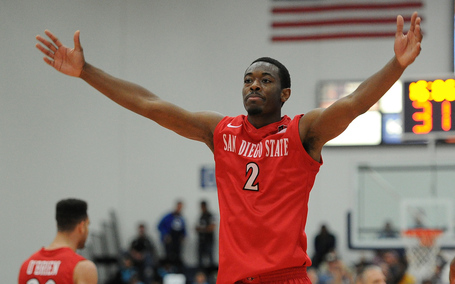 Can the Aztecs win it all?

3. What style of play will Marquette use on offense/defense?

Before the team got to California, the answer on offense would have been: "Get to the rim whenever possible, work through Gardner in the post, take 3-pointers as a last resort." (I mean, you heard about the carnage against Ohio State, right?) In the last two games, though, Marquette's been able to hit from distance: 7-16 against Fullerton (including 3-3 outings from Jamil Wilson and freshman Jajuan Johnson) and 8-15 against George Washington. Still, Marquette's bread-and-butter is to attack from close range, and a possession without a paint touch is one that usually ends badly.

The defense remains a work in progress. Marquette has a hard-earned reputation as a physical team, but with the renewed emphasis on freedom of movement rules, that's evolving. We've seen more zone early in the season than we're used to from a Buzz Williams team, but that's been the biggest change from years past. As per usual, Marquette will double down every time the ball gets in the paint, so if you've got shooters, get ready for some open looks.

4. Can Todd Mayo step outside of his brother O.J.'s shadow and emerge as a premier player?

A premier player? Probably not. Mayo shows flashes of the family talent from time to time, but consistency has been his main issue, and that seems likely to be the case going forward. He knows how to score, he'll never be accused of being timid on the court (witness the Ohio State massacre, when he was 3-15 from the floor but didn't quit chuckin' until the final buzzer sounded), and he usually plays really hard, but he can get careless with the rock and tends to look for his own shot first. He's a nice player, for sure. But can he ever be *the* guy? I kinda doubt it.

4. What is your impression of the new Big East and where does Marquette fit in?

The Big East 2.0 is the cat's meow, baby, and my only regret is we didn't think of this sooner. We've got a bunch of like-minded institutions, we don't have to worry about playing ball at Tulane or UCF or freaking East Carolina (sorry, I'm still upset about the game Marquette lost in that godforsaken gym in 2003), and we get to go to Omaha and eat Runza to our heart's content. As for where Marquette fits in, I assume you're talking about where we'll finish in the standings, and the short answer is: I have no idea. MU was picked to finish first by the coaches, but that and a quarter will get you a phone call. Villanova looks really good in the early going, and so does Creighton, and Georgetown always manages to be better than you expect them to be (until March, anyways). At this point, I'm just thankful that y'all spared us from having to (potentially) play the Jays like 4 or 5 times this year.

5. What is your prediction of this game?

We're terrible at game predictions, as a rule, and Marquette's results in the early-going haven't made it any easier to forecast what's likely to happen from game to game, so, with no confidence whatsoever, we'll say: SDSU 64, Marquette 60.