Zylan Cheatham is the Remaining Piece in the Aztecs Basketball Recruiting Puzzle for 2014.

The San Diego St. Aztecs have had more hits than misses on the basketball recruiting circuit as of late. With Rivals No. 17 ranked Malik Pope making his verbal commitment on Oct. 9, guard Kevin Zabo committing earlier this summer, and local product Trey Kell, the Aztecs are setting the stage for their best recruiting year ever. The missing piece: Four-star Forward Zylan Cheatham out of Phoenix. He is ranked No. 73 nationally by Rivals and top 20 at his position.

The scouting report on Cheatham is that he is very athletic and can play either forward position. He rebounds and defends well. He runs the court and attacks the rim. His ability to consistently hit outside shots and whatever team he plays for will ultimately determine whether he plays down low or on the wing.

Keep up with SDSU basketball recruiting 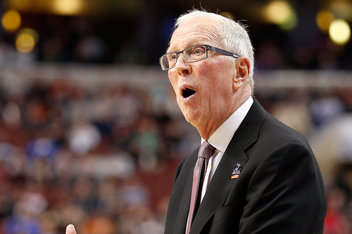 How good can San Diego State's 2014 basketball class be?

After Pope's commitment was announced, Cheatham's Twitter account was flooded with questions and pleadings from fans of his three top schools: Washington, New Mexico and San Diego State. All three schools have him as a priority number one recruit. Considering the volume and frequency of tweets coming his way, Cheatham has been level headed in his responses. Most are brief and non-committal as you might expect, but there is a maturity there as well.

Some of the tweets are amusing, "We got a pope. Now we need a king," says one Aztecs fan. Others tout the merits of Coach Lorenzo Romar at Washington or Steve Fisher at San Diego State. New Mexico fans brag about the prominence of UNM basketball in a state without a major pro sports team. They are looking forward to the Lobo Howl on October 18, where there will be an all-out blitz to recruit Cheatham as part of their Midnight Madness event being broadcast on ESPNU and hosted by Miles Simon.

Originally Cheatham was going to wait until his birthday November 17 before making a decision. More recent feedback indicates that he will likely announce a verbal commitment shortly after taking his final official recruit visit. So we should get word later this month on where he plans to play. The early signing period for making a national letter of intent is November 13 - 20. Look for Cheatham to make that official on his birthday.

Coach Fisher and staff have done a "Goldilocks" job of assessing talent and determining which players were not ranked too high or too low, but just right in terms of fitting their needs and their ability to win commitments. Assistant Coach Justin Hutson is often mentioned as one of the best recruiters on the West Coast and players bring up his name as being instrumental in the process, along with Coach Fisher and Associate Head Coach Brian Dutcher. Hutson was involved in recruiting Pope and Cheatham while at UNLV the last couple of seasons and has been able to secure top talent for the Aztecs since returning in April.

Here are highlights of Cheatham: