The Mountain West television schedule for football is getting closer to being completed as ESPN announced 15 more games that will be shown on its family of networks, the league now has a total of 22 games on an ESPN platform. The other seven were announced a few weeks ago.

The kickoff times and specific channel will not be known until the games get closer; typically there is a window of 12 days prior when kick times and channels are announced from ESPN. Also, the schedule that ESPN sent out indicates that these are all Saturday games, but do not be surprised if some are switched to a Thursday or Friday. 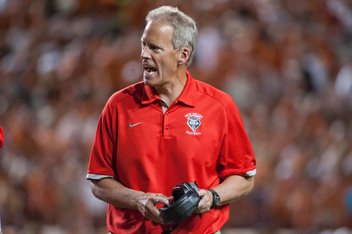 Check out where your MWC teams plays this season.

Teams looking to bolster their national television presence were disappointed, as was Wyoming who is getting just two ESPN games -- one was already known with the road game at Boise State -- the other is an away game against Air Force. The Border War between Wyoming and Colorado State did not get picked up by ESPN, and CBS Sports Network already passed on that game as well. If that rivalry game is going to get a larger audience it will come down to ROOT Sports or Altitude to broadcast that game.

Hawaii is getting even less exposure than Wyoming, they have zero appearances no ESPN which is very strange since for years the Warriors have been a semi-staple for the 12 a.m. ET kickoffs. Yes the team is not that good but there is no live programming at that time, and ESPN probably figures they would do better with SportsCenter or some other generic programming.

Here are the additional games that will be shown on ESPN: