The preseason college football award lists are starting to trickle out and the first one if the Rimington Trophy which is given to the nation's top center. The list has 44 players and it includes six Mountain West players, and trail the SEC, who have nine, for the most nominees from a single conference.

Colorado State's Weston Richburg is a senior who has started all 36 games in his career at Colorado State, all but four at the center spot, and is making his third-straight appearance on the watch list. As for Mountain West awards, Richburg earned All-Mountain West honorable mention in 2012 and 2010, but in 2011 he earned second-team honors.

Tyler Larsen at Utah State was a first-team All-WAC center in 2011 and 2012, plus he like Richburg is making his third appearance on the preseason watch list for the Rimington Trophy. 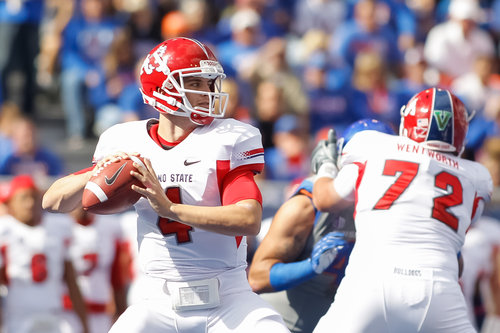 Should Derek Carr be No. 1?

Dilion Farrell is a redshirt senior out of New Mexico and also earned All-Mountain West honorable mention accolades in 2012. His main contribution is helping improve a Lobos rushing game which ended up averaging more than 300 yards per game.

Nevada has junior Matt Galas earning a spot on the Rimington Trophy watch list. He started all 13 games last year and was part of an offensive line that had a top-10 rushing attack and one that allowed the 28th fewest sacks all season.

UNLV's Robert Waterman was another Mountain West center who earned all-league honors in 2012. This is Waterman's second-straight year to be on the watch list. If the Rebels offense can keep quarterback Nick Sherry off of his back, and help Tim Cornett in the rushing game then maybe Waterman can get some national recognition.