College football is still pretty far down the road, however BetOnline.com has thrown everyone a bone by publishing extremely early complete Week 1 odds. There were some select games that were assigned point spreads about a month ago, and that included Hawaii being a 19-point underdog to USC.

Now, we can take a look at an early look for how the complete Mountain West looks in Week 1. Stuff will obviously change with the season still three months away, but enjoy the fun.

Games against FCS opponents are not given odds at this time, and they may not even get them when Week 1 comes around.

Rutgers vs Fresno State (-8.5): A pair of conference co-champions from 2012 face off in an under the radar opening season game. This is a late game and a weeknight, so that may have a small affect on Rutgers making the cross-country jaunt. Oh, and Fresno State has one of the best quarterback/wide receiver combos in Derek Carr and Davante Adams.

Early pick against the spread: Rutgers covers, but does not win.

Utah (-4.5) vs. Utah State: Aggies will be looking to upset the Utes again, and it could happen since Utah State will have the best quarterback on the field in Chuckie Keeton. Utah being the favorite is quite generous since they did not even make a bowl game last year, and Utah State won 11 games.

Early pick against the spread: Utah State will cover, and have a better than a 50 percent chance at the win. 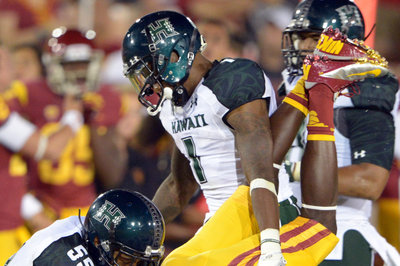 Follow all the updates leading up to the football season.

UNLV vs Minnesota (-17): Umm... I know UNLV is not all that good, and particularly bad on the road, but being more than a two-touchdown underdog to a poor Minnesota team is just crazy. UNLV should get better play at quarterback, and last year these two teams played a very memorable multiple overtime game.

Early pick against the spread:: UNLV, however I would not be surprised if somehow the Rebels would be blown out.

USC (-24) vs. Hawaii: This line has already moved five points in favor of USC, which is somewhat odd since it is not easy to travel to play at Hawaii, even for teams out West. USC is the better team, and Hawaii's quarterback situation, plus offense, is not very good. However, USC is bringining in a new quarterback plus have depth issues, but in Week 1 that may not matter.

Early pick against the spread: Hawaii.

UCLA (-13) vs. Nevada: Thirteen points seems too much. Nevada did lose Stefphon Jefferson who went to the NFL despite having a year of eligibility left. The best part of this game is the quarterback matchup between Brent Hudley and Cody Fajardo, two of the best out West. Offensively, Nevada should be fine but it is their defense that will cause them trouble.

Early pick against the spread: Nevada will cover but not win.

New Mexico (-6) vs. UTSA: WHAT!?!?! The Lobos are a favorite for the first time in a long time. This game they should expect win since UTSA is still just a few years into starting up a football program.

Washington (-3) vs. Boise State: This will be the second time in less than a year that these two teams will play. Previously, the two played in the Las Vegas Bowl, which Boise State won. Something that could swing the favor to Washington is that they are playing in their renovated Husky Stadium, and it will be the first time they have played there in over a season while it was under renovation. However, Boise State gets Joe Southwick back under center in his second year, and should be much better this year; not that last year was all that bad.

Early pick against the spread: Boise State, and they win too.

Nebraska (-21.5) vs. Wyoming: That is a lot of points to be spotted, but remember last year the Cowboys lost to a FCS team. Plus, their defense is not all that great. The only hope to get a win is for quarterback Brett Smith to have a monster game, and get some help on defense with turnovers. Realistically, Nebraska's offense behind quarterback Taylor Martinez is probably going to be too much. The Cowboys could cover if things fall right, but even that is a stretch.

Early pick against the spread: Nebraska, but not all that confidently since this is a three-touchdown spread.

Colorado (-3) Colorado State: The Rams won this game last year, so the Buffaloes will be looking for some revenge. To be honest, neither team is all that good and Colorado is the favorite due to being from the Pac-12.

The off-season is still with us, so for fun provide your thoughts about these early game odds.