Hawai'i opens season against USC at home, but even with the island advantage they are not expected to keep it close against the Trojans.

Share All sharing options for: College football odds: USC opens as a 19-point favorite over Hawai'i

The 2013 college football season is still 120 days away from the Thursday Aug. 29 kickoff date, yet there are odds on a select few college football games. This means that even though we are at the midway point of the never-ending offseason, the season is getting closer with point spreads for a handful of games.

5Dimes has the odds for these early games, and one of the matchups with odds is USC traveling to the islands to face Hawaii. The spread for this games is nearly three touchdowns in favor of USC, 19 to be exact. That is a huge spread for a team who is playing at Hawai'i.

USC is not expected to be this juggernaut of a team this year as they no longer have wide receiver Robert Woods, quarterback Matt Barkley or safety T.J. McDonald, but more importantly this team finished just 6-7 last year. Their expectations are more tempered compared to national title talk from last season. Hawai'i was not much better as they finished 3-9 in 2012, with two of those wins against transitional FBS South Alabama and full fledged FCS Lamar. As for 2013, they should be better but they are not expected to contend for the Mountain West.

When these two teams played last year it was a blowout where USC easily won 49-10, but that was on the opening weekend when the Trojans actually cared about their season. The 2013 team still has stud wide receiver Marqise Lee but the team has less than 70 scholarship players, so depth is an issue. Despite USC losing Woods to the NFL, they do have some potential in Victor Blackwell and Nelson Agholor who each had over 100 yards receiving in their spring game.

Plus, as mentioned there is a new starting quarterback to replace Barkley. Look for Max Wittek to earn the nod, last year he played in eight games and saw time when Barkley was injured. In the Trojans spring game he threw two touchdowns and two picks. The other candidates are sophomore Cody Kessler and true freshman Max Browne, but odds point to Wittek to earn the job. 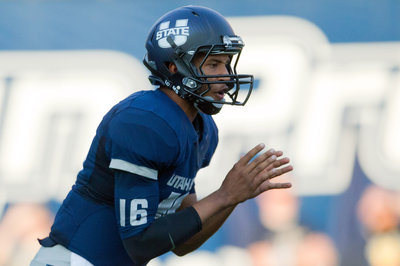 Keep up with 2013 MWC football coverage

Hawai'i does have a new offensive coordinator in Aaron Price and a new quarterback coach in Jorda Wynn who is there to help alleviate Norm Chow's overall responsibilities as the head coach. The offense is new which is an advantage to Hawai'i since USC will have little tape on what Price is bringing to the table, however they will check out what he did at UTEP, which was not all that great.

This 19-point spread is obviously a sign that the oddsmakers are still extremely high on USC, or they have the opposite feel toward Hawai'i. For an opening season game that has a lot of unknowns this spread seems extremely high, but also no one can not fault for giving USC the benefit of the doubt with a spread nearing three touchdowns.