More of the Mountian West television has been released, this time it is CBS Sports Network who released their a slate of 21 games. This brings the Mountain West known TV slate to 28 games under their media rights agreement, and there are still more to be added from CBS Sports Netowrk, ESPN and even other parties.

The CBS Sports Network slate begins on Aug. 29, which is the opening night of college football, as the USC Trojans travel to face off against the Hawaii Warriors at 9 p.m. ET, and the second game on the opening weekend game is Colorado State taking on Colorado in Denver on Sunday at 6 p.m. ET. 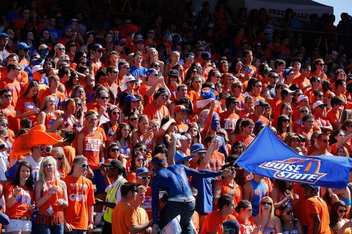 Out of this 21-game lineup there are no games featuring New Mexico or Wyoming, in fact Wyoming has yet to have a game scheduled on the Mountain West television plan.

This plan features eight conference and 13 non-conference games. The only oddity is that the Nevada at Boise State game is on CBS Sports Network. Per the agreement between the league and ESPN, all Boise State games are to be on an ESPN channel. However, there is a clause that states they can trade one game to CBS Sports. The early thought was the game against Tennessee-Martin would be one to possibly switch, but on Oct. 19 there is a huge slate of college football games.