A look at the 2013-14 New Mexico Lobos basketball season.

The New Mexico Lobos ended an otherwise successful season in disappointing fashion with a loss to 14-seed Harvard in the NCAA tournament. The Lobos hope to erase that memory with another strong season and finally dust that chip off their shoulder with a deeper tournament run in the 2013-14 campaign.

The Lobos christened last season with a shootout 86-81 win in The Pit over the Davidson Wildcats during Midnight Madness. The Lobos then travelled to the Caribbean and pulled out a seemingly impossible one-point victory over George Mason in the second round of the Paradise Jam Tournament by scoring six points in the final 12 seconds and eight points in the final 20 seconds. The Lobos went on to claim the trophy by topping then-ranked #21 Connecticut.

New Mexico hit a 12-0 mark by strong pre-conference play and sweeping in-state-rival New Mexico State University in back-to-back games. In a minor upset, that streak was cut short at the hands of a frisky South Dakota State team that beat New Mexico in The Pit 70-65. Morale was restored, however, when the Lobos defeated undefeated #8 Cincinnati on the road in an exhilarating one-point game. But, New Mexico proceeded to drop the ball and dash Lobo fans' spirits with a discouraging 60-46 loss to the Billikens of Saint Louis. 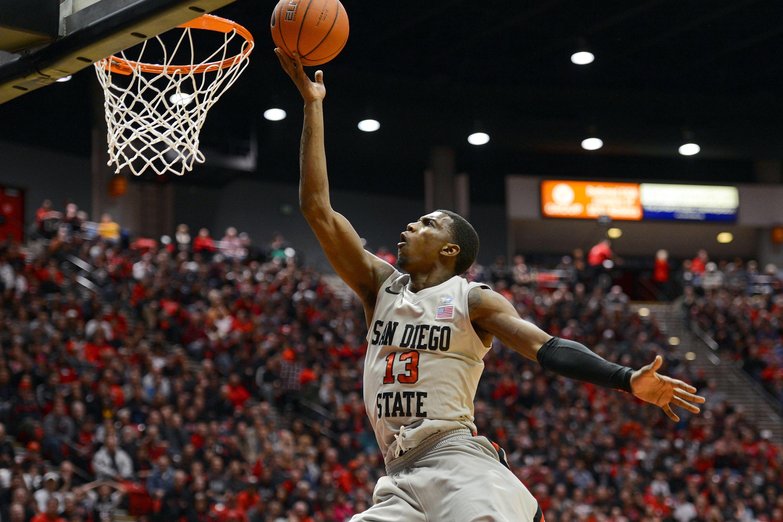 Nonetheless, the Lobos entered conference play with an impressive 13-2 record. A hungry UNLV team with future first overall NBA draft pick, Anthony Bennett, was the first game that would set the tone for the rest of conference play. The Lobos answered with a definitive 65-60 victory in The Pit. The Lobos did not let up; they led (or shared the lead) Mountain West standings for the remainder of the season. To be sure though, the Lobos did suffer three road losses to foes SDSU, UNLV and Air Force.

The Lobos secured the regular season title with back-to-back wins over Wyoming at home and Nevada on the road. Thus, the Lobos journeyed to UNLV's home court as the No. 1 seed to duke it out in the Mountain West Tournament. As predicted, UNM faced rival UNLV in the championship game. The Lobos claimed the trophy with Tony Snell making a 21-point statement that he was not the only Mountain West player worthy of consideration in the NBA draft. The Lobos and their fans were riding high.

For the second time in three years, UNM was selected as a three seed in the NCAA tournament. For the first time ever, the Lobos were slated to face 14-seed Harvard. The season came to an abrupt and vexing end with a 68-62 loss to the Ivy League champions. Albuquerque and the Lobos were dealt their final blow when head coach Steve Alford absconded to southern California to accept UCLA's head coach position.

New Mexico chose Alford's assistant coach and best friend, Craig Neal ("Noodles"), to take the helm in Albuquerque. Neal still has a lot to work with. The Lobos lost important role players in seniors Jamal Fenton and Chad Adams. But the biggest loss will be Tony Snell, who was drafted 20th overall by the Chicago Bulls. The Lobos will surely miss Snell's defensive prowess and 12.4 points per game. Nonetheless, the Lobos return four starters, including seniors Kendall Williams and Cameron Bairstow, and juniors Alex Kirk and Hugh Greenwood.

Kendall Williams was named Mountain West Player of the year averaging 13.3 points and 4.9 assists per game; including an ESPN "Top 10" worthy 46-point performance against Colorado State. And as many are keen to point out, Williams beat out #1 overall draft pick, Anthony Bennett, for this prestigious endorsement.

New Mexico big man Alex Kirk looks to pick up from where he left off last season: 12.1 points and 8.1 rebounds per game. Kirk is a 7-footer with soft hands and a surprisingly accurate long ball.

Bairstow will accompany Kirk in the paint. The tall Aussie had an encouraging summer with a strong performance in the World University Games. In eight games, Bairstow led his team with 12.8 points, 6.8 rebounds, and 1 block per game. Lastly, Greenwood's versatility and clutch shooting complete the returning core. Greenwood is a crafty player who consistently scores (7.1), boards (5.0), and dishes (2.3).

The Lobos hope to find fresh talent from incoming freshmen Cullen Neal (coach Neal's son) and Tim Myles; Cullen can dribble and score, while Myles is long and athletic. UNM can also look forward to junior college transfers Arthur Edwards and Deshawn Delaney, both of whom join the Lobos with high accolades from their previous seasons.

The Lobos will flourish or flounder early on as they compete against several sleeper teams, including UMass and Georgia, in the Charleston Classic Tournament. UNM then faces a tough non-conference schedule that includes Kansas, Cincinnati (back to back), and Marquette. Adding to the pressure of these high profile games is the opportunity to play in 23 nationally televised games this season, a number higher than any previous season.

Despite the program's persistent presence at the NCAA tournament, the Lobos have never advanced to the Sweet Sixteen. Like most things, it's not how you begin, but how you finish. If the Lobos want to be considered a major club, they must prove themselves on the main stage. UNM is the early Mountain West favorite and should make the tournament, maybe not as a three seed, but that is okay. The Lobos and Albuquerque tend to find the pressure distracting. This year will be all about managing expectations and finishing when it counts.