This was a game was one that most felt confident that Wyoming would win, but also a game that was not a slam dunk guaranteed win. However, what was even more concerning was that Wyoming quarterback Brett Smith left the game late in the fourth quarter in an ambulance when he was taken down by a horse-collar tackle and a hit to the head.

Here is the hit via kylegrantham, and ouch: 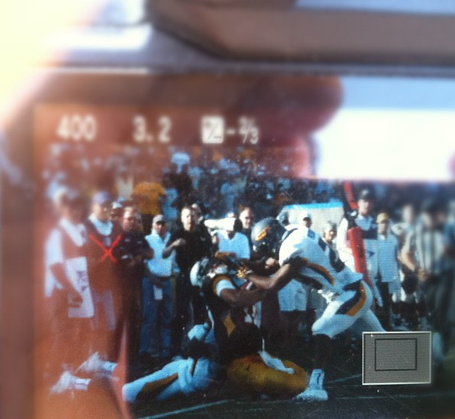 While taken off the field on a stretcher, Smith gave a thumbs up to the crowd at War Memorial Stadium. There is good news for Smith as his injury as all things were positive at the hospital, and Brett's father sent out a reassuring message about his son's situation:

Thx everyone for the thoughts and prayers. Brett has a headache but he will be fine. Pissed he didn't score on the play.#gowyo #thebestfans

As for the game itself, Wyoming is in desperate need of at least a decent running game. In Saturday's game against Toledo the running game did not play well as they had 184 yards with 62 of those going to Smith. Starting running back D.J. May had 64 yards on just eight carries. So, not sure why they did not give him a few more carries, if not at least make the offense more balanced.

It could have been that Smith's arm was on fire as he threw for 339 yards on 20-of-28 completions, plus he tossed two interceptions and two picks. The offense had plenty of big plays, but 76 yards of penalties and three turnovers hurt the Cowboys in this game. Toledo did not turn the ball over at all and on those three takeaways they earned they were turned those into 10 points, and that was the difference in the game.

Toledo's offense also brought out a different strategy as they played two quarterbacks against the Arizona Wildcats with Terrance Owens and Austin Dantin, but on Saturday it was only Owens who saw time. Owens had a huge game by throwing for 300 yards and four touchdowns.

Wyoming started off strong by going up 14-3 and looked like they were going to cruise to victory as they were moving the ball at will. However in the second quarter and third quarters the Toledo offense came alive by outscoring Wyoming 24-6, and led 27-20 heading into the final quarter.

In the final quarter Wyoming did outscore Toledo 11-7 but it was not enough to get the win. The penalties are what really hurt Wyoming as they seemed to come at the worst possible times on Saturday afternoon.

Had Smith not been knocked out of this game late in the fourth quarter it is possible that Wyoming could have at least played for the tie. The Cowboys had one more possession after Smith left the game and the backup was Colby Kirkegaard but could not move the ball. Wyoming got the ball to their own 37-yard line after a 11-yard run by May to put the Cowboys about 35 yards out of field goal range to tie the game, but Wyoming did not trust Kirkegaard as they elected to run the ball on 4th-and-4 which came up short.

This game actually also could have been a much larger win for Toledo as they missed a pair of field goals in this game, but overall this is a tough loss for Wyoming who was in this game until the very end. Then losing Smith late in the game with the outcome still in doubt made this loss tough to bear, because they did not have their best player on the field to see if they could tie or possibly win this game.