Getting To Know Michigan From Maize 'N Brew

Share All sharing options for: Getting To Know Michigan From Maize 'N Brew 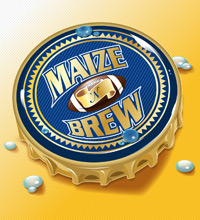 To get to know the Michigan Wolverines better, I reached out to Maize 'N Brew to ask them a few questions about how they will fare against the Air Force Falcons. I already answered a Q&A with them earlier, so make sure to check that out as well.

1. Do you think that any part of the team is over looking past this Air Force team, I would assume since Brady Hoke coached against Air Force while at San Diego State he would stress how difficult Air Force can be.

I don't think Brady Hoke is the type of coach that let's his team get too caught up in looking ahead, and with UMass next on the schedule I would imagine that Michigan has its full attention on Air Force.

That being said, with the rough loss a week ago to Alabama, the weird travel day back that essentially robbed the team of Sunday prep time, and all the stuff that has swirled around since the game (Toussaint reinstated, Robinson criticized, and the MSU player twitter ordeal) I wouldn't be surprised if Michigan wasn't sharp right away. Air Force isn't just a tough team to play physically, but mentally it is taxing to deal with the onslaught of a well-run option attack. Hoke knows this, but the players might take a bit of time to have it click in their head. Hopefully it happens sooner rather than later.

2. How big of a deal is it that Michigan gets back running back Fitzgerald Toussaint in the lineup, and how much will his presence help the Wolverine offense overall.

A huge deal. Having Toussaint a week ago might not have made a huge difference, but against teams that aren't Alabama, Toussaint is the piece that elevates this offense from good to great. Toussaint is a complete running back that can thrive in every aspect of Michigan's run game from I-form to shotgun spread. He has speed in the open field and an uncanny ability to work through traffic. Pairing him next to Robinson gives the Michigan offense two dangerous running threats and it gives Michigan more credibility in play action fakes.

Vincent Smith is great as a third down back, but he doesn't have the skills to hold up as an every down back, and last week Thomas Rawls was exposed as a guy that just doesn't have enough elusiveness to be anything but a short yardage pounder. Toussaint gives the offense another dimension, and his return should lead to a big game for the Wolverines on offense.

3. How much are you concerned about Michigan's defense going up against a unique run-option offense that Air Force runs. The defenders must play their assignment every play so they do not get beat, is Michigan's defense capable of playing that type of disciplined defense against Air Force's offense.

Michigan is inexperienced on the defensive line and young at linebacker. What's more, a lot of these players that have played before have been criticized for problems reading and reacting quickly, and for not holding up well in contain on the edges. THe prospect of this defensive front seven having to stop an entrenched option offense after just a few days of practice is terrifying, and I have no doubt Michigan runs into all sorts of struggles early.

My main point of hope is that defensive coordinator Greg Mattison has shown a wonderful ability to correct problems during the flow of the game. A lot of these same players would make mistakes in the first half last year and then make the correct play in the second half. If Mattison can keep everyone's head on straight, Michigan should be able to adjust well enough to slow this offense down.

4. The offense gets the credit on most teams, but defense is huge on Saturday. Who are some key players defensively that Michigan can trot out there and slow down, or even stop, the Air Force rushing attack.

First, Michigan is going to need big games out of the interior defensive linemen, fresh off them getting thrown around like rag dolls against Alabama's line a week ago. Will Campbell, Quinton Washington, and the rest of the backup tackles need to make life hard on the interior offensive line, and hopefully throw the timing off on Air Force's option. This group has a definite size advantage, and a number of these players have solid athleticism for being 300lbs. maulers. A big game from one or two players on the inside could really throw a wrench into the Air Force option.

Past that it will be up to the starting linebackers, Jake Ryan, Desmond Morgan and Kenny Demens, to flow to the ball and get off blocks. All three are good players but sometimes struggle with reading plays and reacting quick enough. Jake Ryan will be the real X-factor here as he is Michigan's most explosive edge rusher, but also prone to lapses when it comes to playing assignment football. He could very well alternate big TFLs and blown assignments all game.

Finally, the one name Air Force fans will almost certainly remember after the game is Jordan Kovacs, Michigan's fourth year starter at strong safety and an absolute machine tackling in space. He will rob the Falcons of a few long gainers and bail out the defensive front seven on multiple occasions. Kovacs will spend a lot of time rolled up into the box, and Air Force would do well to run away from him lest this:

5. How do you think this game plays out? Michigan is a 20-point favorite, do you think they can cover that spread, and on the other side of the coin, what would it take for Air Force to upset Michigan.

I think the first half is a back and forth dogfight between the two teams, and Michigan slowly exerts control in the second half as it gets more comfortable defending the option. My prediction is that this game ends up with Michigan winning by 10-14 points. However, if Michigan's offense comes out and plays really well early while the defense does a good job of making Air Force earn its way down the field by not giving up big plays, things could get out of hand early and Michigan could cruise to a 30 point win. I don't expect that, but it is possible if things go right for Michigan.

An upset could happen if Air Force just hangs around. If Michigan's offense has some trouble getting into a rhythm -- not a long shot by any means given the situation with Toussaint -- and the defense keeps messing up assignments and letting Air Force break off bigger chunks of yardage, the game could stay close late into the second half. At that point it could be anyone's game.