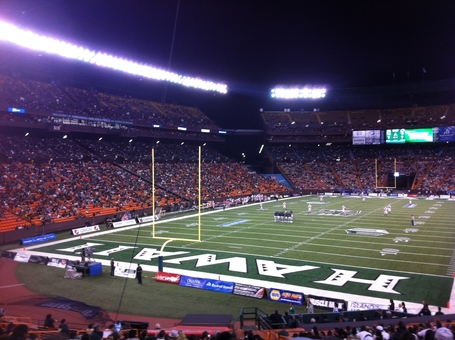 There were some good and bad things going on at Aloha Stadium last night. First the good. The Warriors overpowered the FCS Lamar Cardinals team 54-2 in a game that one team was hungry to get onto the field after a bye and the other sun tanning on the beach in Waikiki.

In front of a quiet crowd of 29,011, the Warriors made sure they kept the intensity going in all four quarters of the game. Quarterback Sean Schroeder threw for 150 yards and three touchdowns while running backs Will Gregory, John Lister, Joey Iosefa, and Sterling Jackson combined to rush for 215 of the team's 219 rushing yards. The Warriors had 369 of total offense. But the defense and special teams were the main factors in the game that gave the offense great field position all game long.

The Warrior's defense held the Cardinals to just 127 yards of total offense with Senior Paipai Falemalu leading the team with five tackles and a sack. For special teams, John Hardy-Tuliau blocked his sixth career punt and freshman Ne'Quan Phillips picked up the ball and spun his way down the sidelines for a 20 yard touchdown. Mike Edwards opened the second half with a 95-yard kickoff return for a TD. By the way it would have been a shut out if the Warriors didn't botch an extra point and a Lamar player ran it all the way for two points.

Now the bad news for UH fans. If you were at the game like I was you were not happy with the way the stadium ran and was managed. The fan atmosphere was dull and the game just dragged on during dead time. Yes it was a half empty stadium, but in games past the same amount of fans at Aloha Stadium were louder and were more into the game. The PA announcer at the stadium has been there for over a decade with his monotone calls during the game.

The referee was getting frustrated with his mike not working in the first half and had to repeatedly ask the clock operator several times to reset the game clock. I mean in the fourth quarter the ref lost his patience after asking the clock operator to change the game clock forward and he just ran the play even though the time was wrong(He might get in trouble after they look at the tape on that one). I see one fan running across the field with no security or police stopping her. She even ran the length of the field right past Head Coach Norm Chow.

And finally the brawl going on in the stands right by the Lamar bench. I don't know who started it but I know what started it. Alcohol! People need to drink responsibility and enjoy the game or don't come. I guarantee if another one of these fights occur in the stands there will be no alcohol consumption in the stadium again.

Warrior fans don't let a few bad apples deter you from attending the next home game which is this Saturday September 22 at 4:30 HST at Aloha Stadium. We need a PACKed house to create problems for a well-oiled offensive machine Nevada Wolfpack team that amassed 655 of total offense yesterday against Northwestern St.